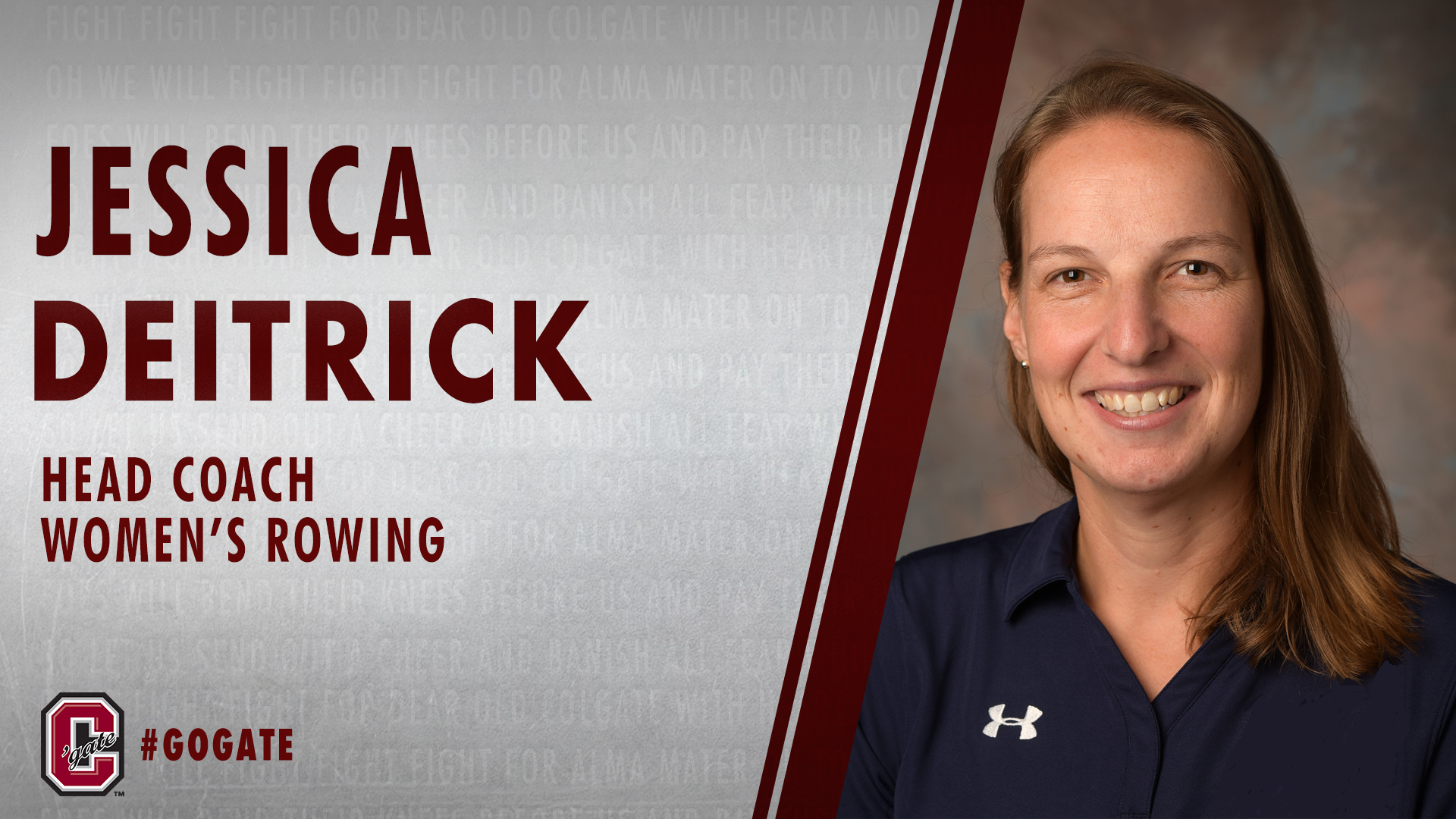 Deitrick brings championship credentials to Hamilton. She spent the past three seasons as the assistant coach at Navy for a Mids program that is riding a streak of five consecutive Patriot League titles.

Navy swept to this year’s conference crown with victories in all three races. The Mids then went on to a No. 17 final finish at the NCAA Championships, matching the best result in program history.

“I am truly excited to welcome Jessica Deitrick as the newest addition to our Colgate head coaching community,” Moore said. “Jessica is a competitor, an educator, and is passionate about developing young women through the sport of rowing. The future of Colgate Women’s Rowing is very bright with Jessica at the helm, and I can’t wait to see what she will build here.

“When we began this process to find our next head women’s rowing coach, we were seeking someone who would elevate our program in the Patriot League while developing our rowing student-athletes on and off the water and supporting their sustained academic excellence. We are so thrilled to have found that coach in Jessica Deitrick. Not only are we confident in her ability to do these things, but we are impressed by her history of building programs — both as a head coach at High Point and as an assistant at Navy. As we have come to know her through this search process, we are also convinced she will be an excellent addition to our department and to the robust coaching community we are nurturing here.”

In addition to their streak of Patriot League championships, the Mids finished 20th, 17th and 17th nationally in Deitrick’s three seasons with the program. The Navy coaches were named 2018 and 2019 CRCA Region Staff of the Year.

Deitrick this summer coached at the prestigious Henley Royal Regatta and Henley Women’s Regatta in England.

At Women’s Henley, the women’s straight four (4-) knocked off local teams Oxford University and Leander Club to advance to the semifinals. They lost in the semis to eventual champions Edinburgh University.

At the Henley Royal Regatta, Deitrick’s Navy crew competed in the King’s Cup for the first time since 1919. Eight different countries represented by their military competed against one another. U.S. Armed Forces won the event, beating Germany in the final.

“I am honored to be named the next head women’s rowing coach at Colgate University,” Deitrick said. “I would like to thank Dr. Nicki Moore, Steve Chouinard, the search committee and President Casey for this amazing opportunity. I am thrilled to be working with exceptional student-athletes and the Colgate faculty and staff.

“After visiting Hamilton, the campus, touring the Glendening Boathouse and meeting the faculty and staff, I knew Colgate University was the right place for me. My vision for this program aligns well with Colgate’s Third-Century Plan and the goals of the Athletics Department. I am confident I can lead the women’s rowing program to many successful seasons on and off the water.”

While at the North Carolina school, Deitrick was responsible for the competitive efforts of more than 40 male and female student-athletes. In two years leading the program, both the men’s and women’s teams prospered in races at the Knecht Cup, Dad Vails, SIRAs and the American Collegiate Rowing Association national championship.

A native of Rhinebeck, New York, in the Lower Hudson River Valley, Deitrick rowed collegiately at William Smith. She competed with the Herons for four varsity seasons and was a team captain during her junior and senior campaigns.

Deitrick graduated William Smith College in May 2008 with a B.A. in psychology before attaining a master’s degree in special education from Elon University in August 2011.

She is married to William Deitrick of Baltimore.