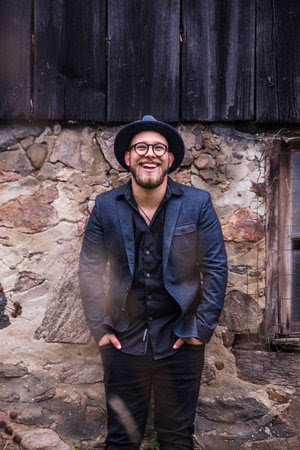 On Friday, Oct. 18, 2019, Benjamin Dakota Rogers makes his highly anticipated return to the folk world with his brand new single, Better by Now, stripping the genre down to its core and emotionally charging it with the raw human experience that can only be delivered from the honesty and grit of a farm boy’s hands. Hailing from the countryside of rural Ontario, Benjamin funnels his penchant for starry nights and nostalgia into his stylized folk sound, reaching far beyond to include influences of roots, blues and country music.

Rogers found a passion and purpose in folk music after inheriting his great-grandfather’s violin at the tender age of 7. From budding musician to awe-inspiring performer, his love of creating meaningful music has taken the reins and garnered much attention from folk artists and enthusiasts alike.

“Rogers’ unique voice, thought-provoking lyrics, energetic performances and dynamic fiddle techniques leave this up-and-coming musician in a class of his own.” (InSpades Magazine)

With the release of his new single, this singer-songwriter and multi-instrumentalist folk-phenomenon proves he’s at the top of his game in every way imaginable, grasping for the stars that light up his quaint hometown of Scotland, Ont. As he prepares for the release of his most ambitious project to date, Rogers continues to redefine the genre with an infinite sound evolution that promises to deepen the path he’s already carved for himself for years to come.

On Saturday, Oct. 19, 2019, you might expect a band that calls itself Yarn to, naturally, tend to spin a yarn or two. “That’s what we do, we tell stories, live and in the studio, truth and fiction,” singer/songwriter Blake Christiana insists. “We don’t always opt for consistency. There’s a different vibe onstage from what comes through in our recordings. There’s a difference in every show as well, you never know what you’re going to get.”

Yarn’s ability to persevere ought to come as no great surprise, especially for a band that spent two years honing their chops during a Monday night residency at the famed Kenny’s Castaway in New York’s Greenwich Village. In effect, it allowed them to rehearse onstage, mostly in front of audiences that often ranged in size from five to a hundred people on any given night. Five studio albums followed – Yarn (2007), Empty Pockets (2008), Come On In (2010), Almost Home (2012), and Shine the Light On (2013). The band then took to the road, playing upwards of 170 shows a year and sharing stages with such superstars as Dwight Yoakam, Charlie Daniels, Marty Stuart, Allison Krauss, Leon Russell, Jim Lauderdale and The Lumineers. They performed at any number of prestigious venues – Mountain Stage, Daytrotter, the Orange Peel in Asheville, the Fox Theater in Boulder, the 9:30 Club in D.C, South by Southwest, the Strawberry Festival, Rhythm and Roots, Meadowgrass, Floydfest and more, eventually surpassing 1,000 shows, half a million miles and performances in nearly every state. They’ve driven nonstop, made countless radio station appearances, driven broken-down RVs and watched as their van caught fire. They’ve paid their dues and then some, looking forward even as they were forced to glance behind.

Indeed, the accolades piled up quickly along the way. They have landed on the Grammy ballot 4 times, garnered nods from the Americana Music Association, placed top five on both Radio and Records and the AMA album charts, garnered airplay on Sirius FM, iTunes, Pandora, CNN, and CMT, and also accorded the “Download of the Day” from Rolling Stone. Shine the Light On found shared songwriting credits with John Oates (the Oates of Hall & Oates fame), and when audiences expressed their admiration, it brought the band a populist following of diehard devotees, popularly known as “the Yarmy.”

As odd as that might seem, it’s proof positive that the Brooklyn- and Raleigh-based band – which is currently comprised of Blake Christiana, Rod Hohl, bassist Rick Bugel, and drummer Robert Bonhomme – have made their mark, and in dealing with their emotions, scars and circumstances, they find themselves in a position to share those experiences with others who have juggled similar sentiments.

Then again, one needn’t take them at their word. When one unravels Yarn, it’s best to add one’s own interpretations.

The man Jerry Lee Lewis once likened to “that Cash kid, but good” has enjoyed a long and varied career. Jack Grace is that man: a singer, songwriter, and guitarist who’s been touring and recording for over 25 years. His duet with Norah Jones, “Bad Wind Blowing” was a standout tune on his last recording, Everything I Say Is A Lie, produced by Joan Jett and Steve Earle’s former guitarist Eric Ambel. He’s performed with a diverse collection of artists, like the aforementioned Lewis as well as Doc Watson, Fishbone, Junior Brown, The Meters and has even shared the bill with Merle Haggard.

He’s contributed tunes and scoring to several movies, including both Super Troopers 1 and 2, with the cult hit “Big Bear,” as well as the rollicking “What I Drink and Who I Meet at the Track,” heard in Beerfest. A seasoned solo performer, his current focus, Jack’s groups have comprised a variety of configurations over the years. With a revolving cast of characters, he leads anything from simple guitar, bass, and drum trios to seven-piece ensembles complete with piano, steel, trombone, and trumpet.