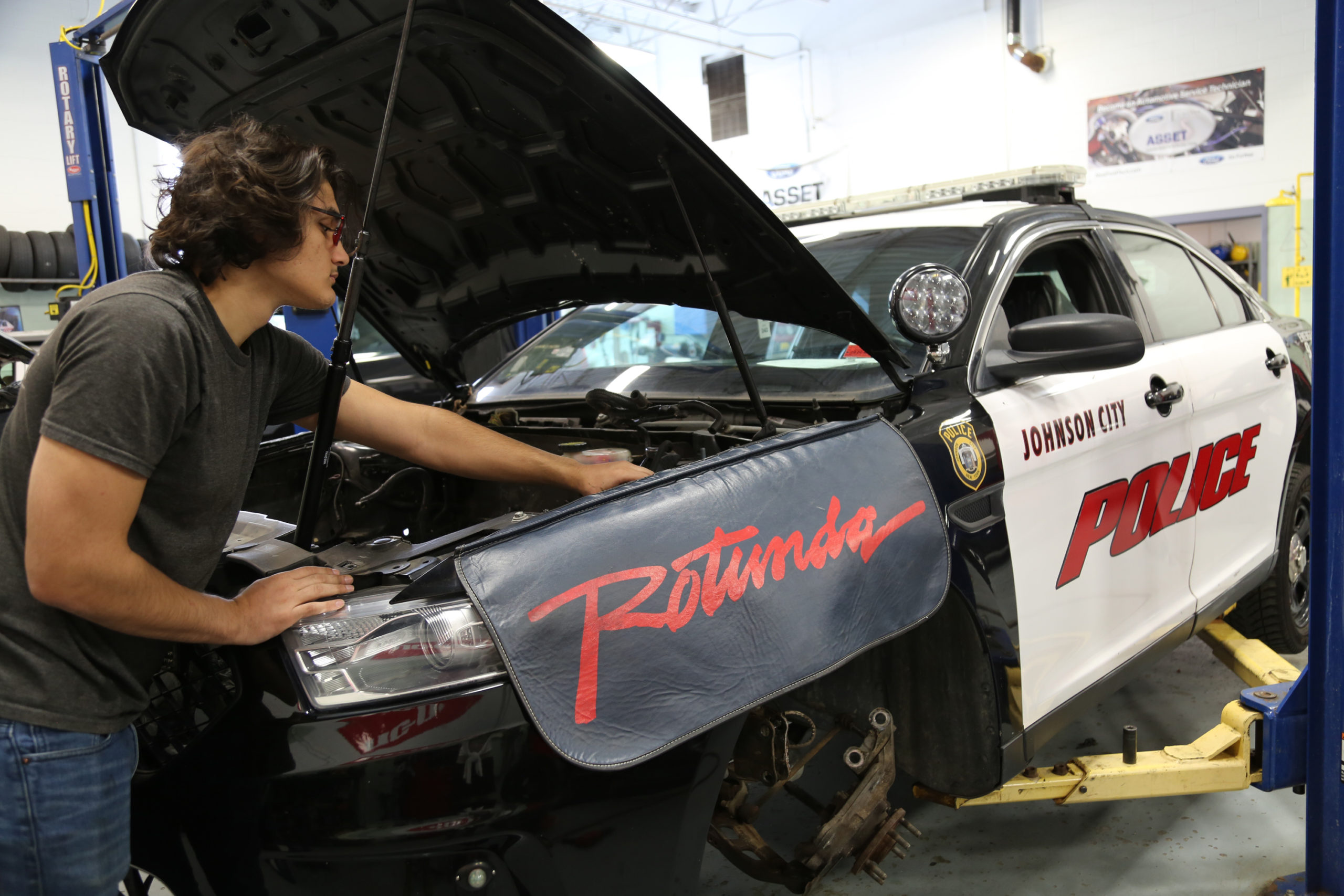 The cruiser of a fallen police officer will soon find its permanent home at the Discovery Center Story Garden, in Johnson City, thanks to SUNY Morrisville’s Automotive Department.

Faculty, staff and students are preparing the car of Johnson City police officer David “DW” Smith, who was killed in the line of duty in March 2014, to be donated to the Discovery Center Story Garden.

There, the vehicle will honor Smith’s memory and become an educational part of helping children understand the everyday dedication of law enforcement officers. It will join various participatory exhibits and displays at the Story Garden, a unique space that features hands-on interactive experiences.

Students from all of SUNY Morrisville’s automotive programs will be involved in the project, which includes removing the driver’s side door that will become part of the National Law Enforcement Officers Memorial in Washington D.C., and installing a replacement door.

They are also fabricating the car’s interior so it’s safe for interaction— removing the engine, transmission and all of the parts beneath the hood, which the college will use for instructional purposes.

Work on the 2013 Ford Taurus ties in with much of what’s going on in the college’s automotive technology Ford ASSET (Automotive Student Service Educational Training) program and labs, a large reason why the department took it on as a special project.

“It fits in to everything students are doing in class,” said Associate Professor of automotive technology Ray Grabowski, referring to the college’s Ford ASSET program, a cooperative education partnership among SUNY Morrisville, Ford and Lincoln Dealers, and Ford Motor Company. The program gives students on-the-job training at a sponsoring Ford or Lincoln dealership while earning an Associate in Applied Science (A.A.S.) degree in automotive technology.

“This is a valuable community and educational opportunity for us,” Grabowski said. “The technical support is here and readily available, and it gets our students involved. It is also a way for us to give back to those who serve.”

“We appreciate the teamwork and support from Morrisville to make this project a reality,” said Nancy Hargrave, supervisor of The Discovery Center Story Garden. “We are so impressed with the facilities and all the support systems SUNY Morrisville has.”

McBride has taken a special interest in the project as a stepping stone toward his future.

“I’m doing engine repair and a lot of things I have not done before,” he said. “It is helpful for my future career to see and know all of the different things techs go through on a daily basis.” A capstone internship in his senior year will also ready him for the industry.

As work on the cruiser progresses, many more hands will be pitching in, including members of the Automotive Club.

“We want to get as many automotive students involved as possible,” Grabowski said.

Students are doing much of the work in Miller’s engine’s module class. Once completed, the car will be moved to the auto body facility for decal work and paint touch-ups by auto body technology students.

Smith’s former car ultimately will end up in a garage at the Story Garden, along with a mini jail and stations for imaginative play. It will be unveiled and officially open to the public on Saturday, June 6, at the Discovery Center.

The center is just one of the many ways the community remembers Smith, an 18-year department veteran who was shot and killed while responding to a disturbance at the Southern Tier Imaging Center, in Johnson City.

‘Box of Books’ returning to OCC this fall