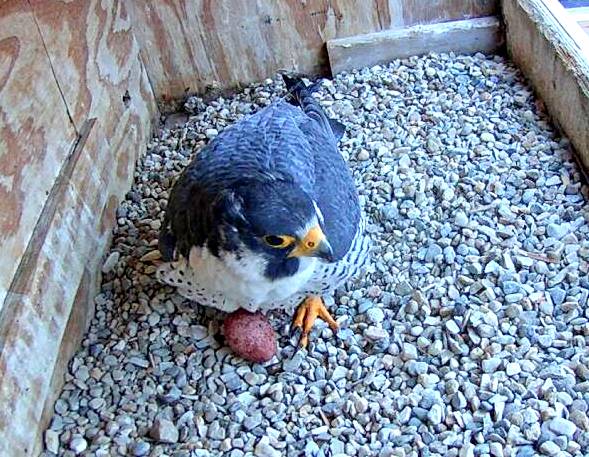 Saturday morning, at approximately 4:24 a.m., the Utica Peregrine Falcons (named Astrid & Ares) produced their first egg for the 2016 breeding season. We can expect up to three more eggs to be laid in the coming week. The egg-laying took place in the nest box on a 15th-floor ledge on the Adirondack Bank Building in downtown Utica. This is the same location where the pair successfully raised two young in 2015.

Members of the Utica Peregrine Falcon Project thought that egg-laying was imminent based on the recent behavior of the female falcon, although there was a false alarm two days ago when the female appeared to be ready to lay but didn’t. The incubation period for Peregrine Falcons is at least 33 days, and so we expect hatching of the eggs to begin in late April or early May.

The incubation period for Peregrine Falcons is at least 33 days, so we expect hatching of the eggs to begin in late April or early May.

Peregrine Falcons, which are famous for being the fastest birds in the world, remain on the endangered species list in New York state. There are only about 75 pairs known to nest in the state. Around half of those nest sites are in the Adirondacks; most of the others are in cities or on bridges over the Hudson River.

In urban areas, falcons feed mostly on non-native rock pigeons and European starlings. Monitoring of falcon nests is done for both conservation and educational purposes. Live-streaming video from the Utica nest is available at the UPFP’s website: UticaPeregrineFalcons.com. Regular updates and videos can also be found on the Utica Falcon Watch Facebook page.

In 2014, Astrid and Ares became the first pair of Peregrine Falcons known to successfully breed in Utica and in Oneida County history.