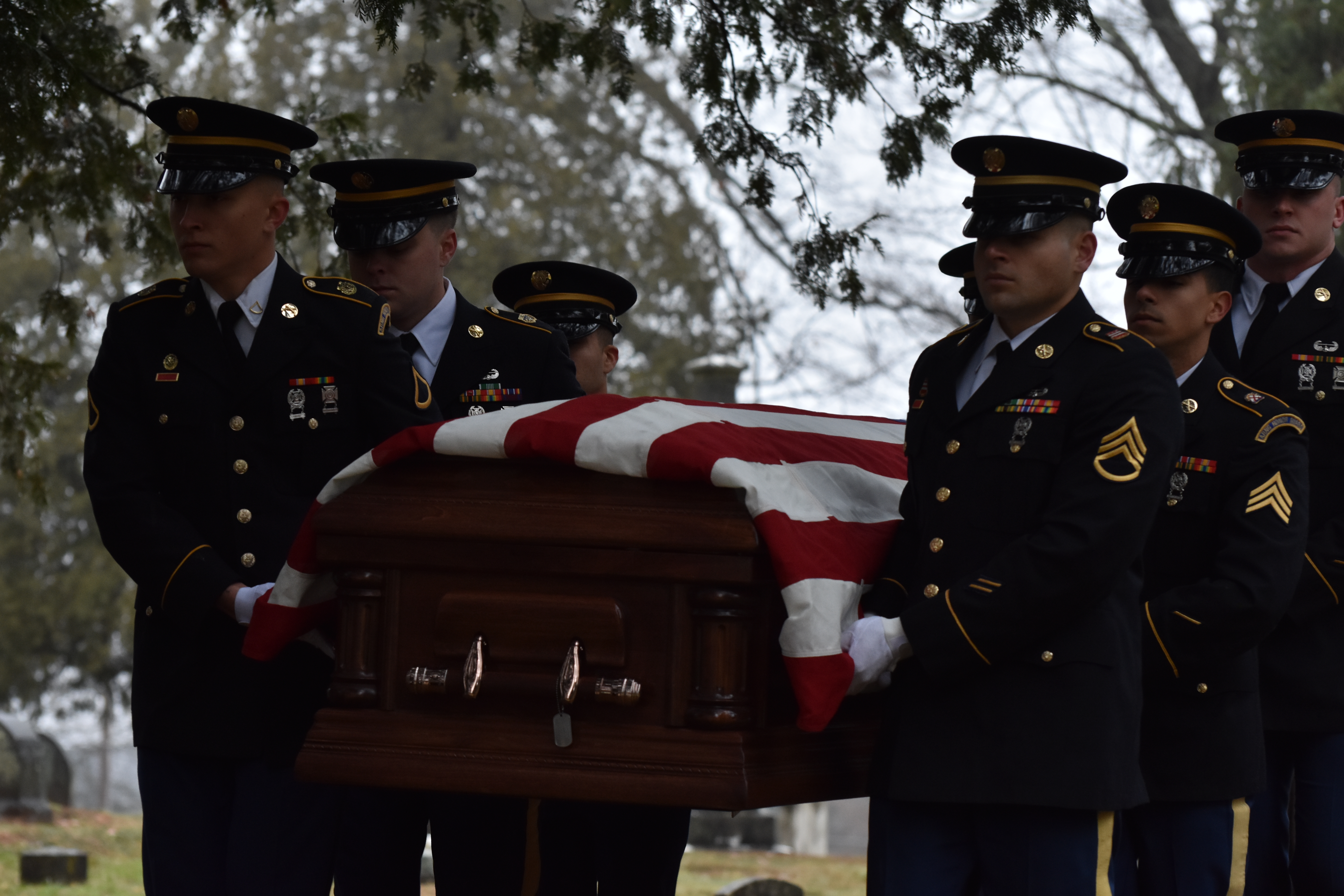 The New York Army and Air National Guard will have provided military funeral honors for 11,115 families of veterans and military members during 2018 by midnight Dec. 31.

Those honored in 2018 included Lewis Smith, a former soldier who served in the Army from 1958 to 1960, and who was buried at Gerald B. Solomon Saratoga National Cemetery on Dec. 20; and Army Pfc. John Martin, a Soldier who fought and died in Korea in Dec. 1950 and was interred Dec. 2 in the cemetery in Schuylerville next to his parents.

The number is not much different from the 11,170 funeral services the New York Army and Air National Guard conducted across the state in 2017.

New York Army National Guard teams located across the state are expected to conduct 8,970 funerals by the end of the year, according to Peter J. Moran, the New York State coordinator for the military funeral honors program. As of Dec. 20 the Army National Guard Honor Guard Soldiers had conducted 8,750 missions.

The bulk of those funerals – 5,184 – were handled by soldiers based on Long Island and New York City. Soldiers serving the region from Albany to Syracuse and north conducted 1,532 funerals. Another 2,034 funerals have been conducted by teams covering the region from Rochester to Buffalo and the Southern Tier counties.

The New York Air National Guard’s five wings and the Eastern Air Defense Sector-a component of the North American Aerospace Defense Command-each have their own base honor guard.

The 106th Rescue Wing at Gabreski Air National Guard Base at Westhampton Beach on Long Island, conducted the most funerals, with 800 expected to be completed by New Year’s Day 2019.

About a third of the funerals the wing team covers are held at Calverton National Cemetery in Riverhead which, at more than 1,000 acres and more than 220,000 interments, is the largest national cemetery in the country.

The Eastern Air Defense Sector in Rome has conducted 35 military funerals in 2018, while the 174th Attack Wing at Hancock Air National Guard Base in Syracuse, N.Y, has conducted 292 military funerals for the year. The 174th has three Airmen devoted to funeral details on a full-time basis and 30 Airmen who volunteer for details when needed.

Since 2000, federal law has mandated that any military veteran who did not receive a dishonorable discharge from the armed forces is eligible for military honors at his or her funeral. The ceremony must include the folding and presenting of the flag of the United States to the veteran’s survivors and the playing of Taps.

The law mandates that all former service members’ funerals must include the folding and presenting of an American flag to the veterans survivors and the playing of taps. The honor guard’s normally use an electronic bugle-a bugle with a sound system inside-to provide this other service.

Those eligible for funeral honors include:

· Military members on active duty or the Reserves, which includes the National Guard

Serving military members and retirees are eligible for services that can include pallbearers and a firing party as well as the basic funeral functions.

The New York Army National Guard had been providing funeral honors for over 10,000 veterans annually from 2010 to 2014, but those numbers began declining as elderly World War II veterans died, Moran said.

The New York Army National Guard has 36 members who conduct funerals on a full-time basis and another 90 to 110 part-time soldiers who can be called on as needed, according to Moran. Each soldier goes through a training program designed to hone their skills in performing the precise steps involved in the program.

New York Army National Guard Sgt. Joshua Sanzo, who heads the Latham honor guard office, is responsible for coordinating funeral services from the Hudson Valley to the Canadian border and west to Utica. His team is responsible for burials at Gerald B. Solomon Saratoga National Cemetery and conducted over 900 funerals in 2018.

He has three full-time honor guard soldiers and five to six part-time National Guard soldiers he can call on.

The biggest challenge, Sanzo said, is ensuring that he gets his people out to each funeral.

“We’re seeing an increase in details in my office,” he said. “To me, personally, the most rewarding thing is to be able to give the veterans the honors they deserve. It is us being able to give back to the veterans and giving them their final salute and to lay a fallen brother to rest.”

The 109th Airlift Wing at Stratton Air National Guard Base in Scotia provides military funeral services in 22 New York counties and western Vermont and Massachusetts, according to Master Sgt. Terra Martin, the non-commissioned officer in charge of the base honor guard. Six Airmen working full-time and from 10 to 14 part-time volunteers conduct the funerals across the region.

“We like doing the mission because it brings a sense of pride,” Martin said. “Sometimes we are the only representative that the family will see in regards to any military of the Air Force. So when we can provide final honors to a loved one, it means a lot to us.”

Tech Sgt. Alexander Javier-Hernandez, who runs the honor guard for the 105th Airlift Wing, said it’s rewarding to “take care of our own. “

“Taking care of our veterans is what most of us like,” Javier-Hernandez said. “We like being there for our veterans.”