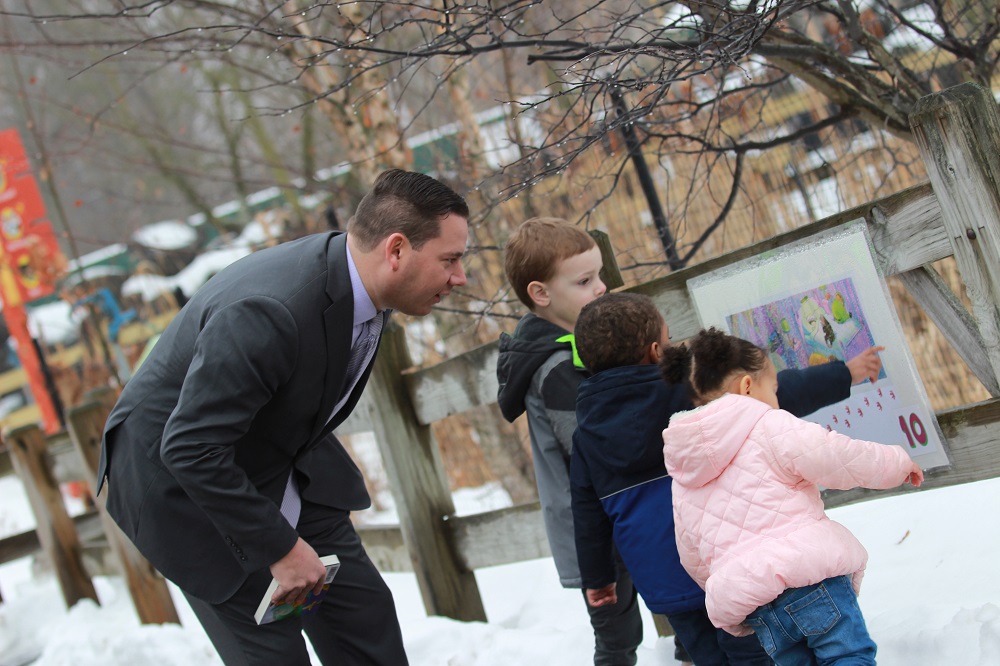 Onondaga County Executive Ryan McMahon led a group of preschool children and their families through the Rosamond Gifford Zoo Tuesday to unveil the county’s first StoryWalk, a project that supports early literacy as well as exercise.

The StoryWalk, a collaboration among the Early Childhood Alliance, the Onondaga County Public Library system and the zoo, offers a display version of the children’s book “Good Night, Gorilla” whose pages lead kids on a walk past zoo animals as they follow the story to its conclusion.

The StoryWalk concept was created by Anne Ferguson of Montpelier, VT, in 2007 and launched by the Kellogg-Hubbard Library and the Vermont Bicycle & Pedestrian Coalition. It has since been trademarked and adapted in all 50 states and several other countries. Several libraries in Onondaga County do StoryWalks at their locations in the warmer months.

County Executive McMahon said StoryWalk fits perfectly with his mission to support early learning initiatives that are affordable and easily accessible to families of all demographics.

“We are placing a renewed focus on ensuring our children are kindergarten ready, and there is no better partner in that effort than the team at Early Childhood Alliance,” McMahon said. “I am excited that we are now able to add our teams at the Rosamond Gifford Zoo and the Onondaga County Public Libraries to that effort with this fun and family-friendly event.”

“As families across the County prepare for winter break, the Zoo is the perfect place to check out the animals, make some memories, get some exercise and at the same time show our kids how important and fun reading can be,” McMahon added.

OCPL Executive Director Christian Zabriskie and Early Childhood Alliance Director Laurie Black said they thought the zoo as an ideal place to launch StoryWalk because it attracts so many families with young children as well as school field trips for every first and second-grade class in Syracuse.

“It is so exciting to be moving while reading a story!” Zabriskie said. “Parents, your children may not always remember the story, but they will remember the time spent together.”

The “Good Night, Gorilla” StoryWalk starts in the zoo upper lobby, runs through the USS Antiquities Cave, then heads outside to loop around the courtyard to the Social Animals wing, where it ends at an exhibit that’s home to siamang apes, who resemble their cousin the gorilla in the book.

The book, which has very few words, tells the story of a gorilla who steals the zookeeper’s keys and lets all the animals out to follow the zookeeper home and move in with him. It features an adorable mouse carrying a banana and a surprise ending.

The StoryWalk will be displayed at the zoo for the next five weeks, and the zoo is devoting one of its Winter Break activities to spotlight StoryWalk next week. The zoo has declared Wednesday, February 19 StoryWalk Day, and will offer two guided StoryWalks, at 11 a.m. and 2 p.m. Both of Wednesday’s StoryWalks will end with a special keeper chat about siamang apes Abe and Fatima and their relationships with their caregivers.

Onondaga County Public Libraries, ECA and the zoo already are planning the next StoryWalk in April. Stay tuned for a StoryWalk featuring a book about penguins that will lead to the zoo’s Penguin Coast exhibit.