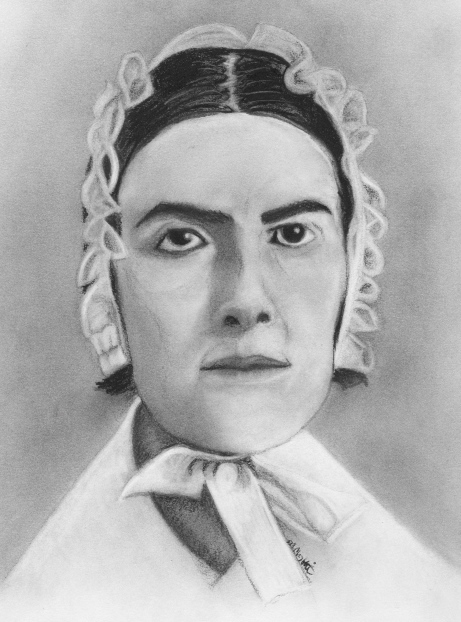 At 1:30 pm Louise W. Knight will present Angelina Grimké: Persuasion and Confrontation in the Antislavery Movement for the Abolition Symposia. Angelina Grimké was a white Southerner who became a northern advocate for the immediate end to slavery in the South and for racial equality.

Born to a wealthy, slave-owning family in Charleston, S.C., she came to see the cruelties of slavery after embracing evangelical Christianity. At age 24 she moved to Philadelphia to escape the witness of slavery and to join a religious denomination that disowned slaveowners.

At age 24 she moved to Philadelphia to escape the witness of slavery and to join a religious denomination that disowned slaveowners. Five years later, in 1835, she became a member of the Philadelphia Female Antislavery Society, and the next year she, and her sister Sarah, became the first female grassroots organizers for the American Anti-Slavery Society. In their speeches, they argued for the full social and political equality of African Americans and the end of slavery in the South.

For almost two years, the sisters traveled around the northeast, stirring up controversy: First because they were “fanatical” abolitionists, and second because they were women giving speeches in public at a time when no woman did so. The egalitarian case Angelina was making was radical for her times. Knight will discuss two of Angelina Grimké’s most famous and remarkable speeches, both given in 1838. The first was a speech to a committee of the Massachusetts legislature, where persuasion seemed possible and she received a respectful welcome.

In the second speech, given in Philadelphia, an angry mob of proslavery white men gathered outside the hall to shout and throw bricks and stones. Angelina’s masterful confrontation with her noisy critics showed her courage and rhetorical skill in the face of controversy.

Louise W. Knight is an author and historian.  She writes about nineteenth and twentieth-century American reform and women’s history.  She first learned about Angelina Grimké while teaching a rhetoric course on women’s nineteenth-century speeches. Though she knew a lot about women’s history, she had never heard of Grimké.

Eventually, she read the 1967 biography about Angelina and her sister Sarah and was drawn to tell their story for a new generation. Knight’s current project is a dual biography of the abolitionists-feminists, Angelina and Sarah Grimké. The book will be published by Flatiron Books in the fall of 2018. She is a Visiting Scholar in the Gender Studies Program at Northwestern University. Knight is the author of two previous books: Jane Addams: Spirit in Action and Citizen: Jane Addams and the Struggle for Democracy.

Her articles have been published in the Journal of Women’s History, Gender & History, the Journal of Community Practice, and Affiliate: Women and Social Work. Knight’s research has been funded by a fellowship from the National Endowment for the Humanities and grants from the Spencer Foundation, the Lilly Endowment, and the Ludwig Vogelstein Foundation. She was a Research Fellow at the Five College Women’s Studies Research Center in 1996, and a Faculty Affiliate at the Center for Humanities at Northwestern University in 2002-03. Knight earned her B.A. and her Master of Arts in Teaching from Wesleyan University in 1972.

Angelina Grimké will be officially nominated to the Hall of Fame during evening ceremonies at 7 p.m. Relatives and affiliates will second the nomination and the official NAHOF portraits created by Melissa Moshetti will be presented.  Max Alden Smith, CoChair of Peterboro Emancipation Days, will provide musical renditions throughout the evening, along with commentaries by Hugh Humphreys, a member of the NAHOF Cabinet of Freedom.

Jan DeAmicis, Co-Chair of the Oneida County Freedom Trail Commission, will commemorate the 181st anniversary of the inaugural meeting of the New York State Antislavery Society.

An 11 o’clock sandwich buffet will be provided by the Peterboro United Methodist Church. After the Abolition Symposia in the afternoon, the Deli on the Green will cater the annual Antislavery Dinner at 5 p.m. The Peterboro Mercantile will have books, buttons, stationery related to the inductions available at the event. Book signings by presenting authors will be available.

The Gerrit Smith Estate National Historic Landmark (5304 Oxbow Road) and the National Abolition Hall of Fame and Museum will open at 9 am on Sunday, Oct. 23. Norman K. Dann PhD, Gerrit Smith biographer, will conduct a tour of the Gerrit Smith Estate at 9 a.m. NAHOF honors antislavery abolitionists, their work to end slavery, and the legacy of that struggle, and strives to complete the second and ongoing abolition – the moral conviction to end racism.NAHOF is located in Peterboro in the building where the New York State Anti-Slavery Society held its inaugural meeting Oct. 22, 1835.

The public is encouraged to attend. A registration package for the sandwich lunch buffet, Abolition Symposia, Antislavery Dinner, and Evening Ceremonies for $55 is due Oct. 15 to the National Abolition Hall of Fame and Museum, 5255 Pleasant Valley Road, PO Box 55, Peterboro NY 13134. Lunch ($14) and Dinner ($41) may be reserved separately by October 15, as well. Walk-ins are welcomed. (Meals must be reserved.) For more information, registration forms, and updates: www.nationalabolitionhalloffameandmuseum.org, nahofm1835@gmail.com, 315-280-8828. Lodging information: www.madisontourism.com