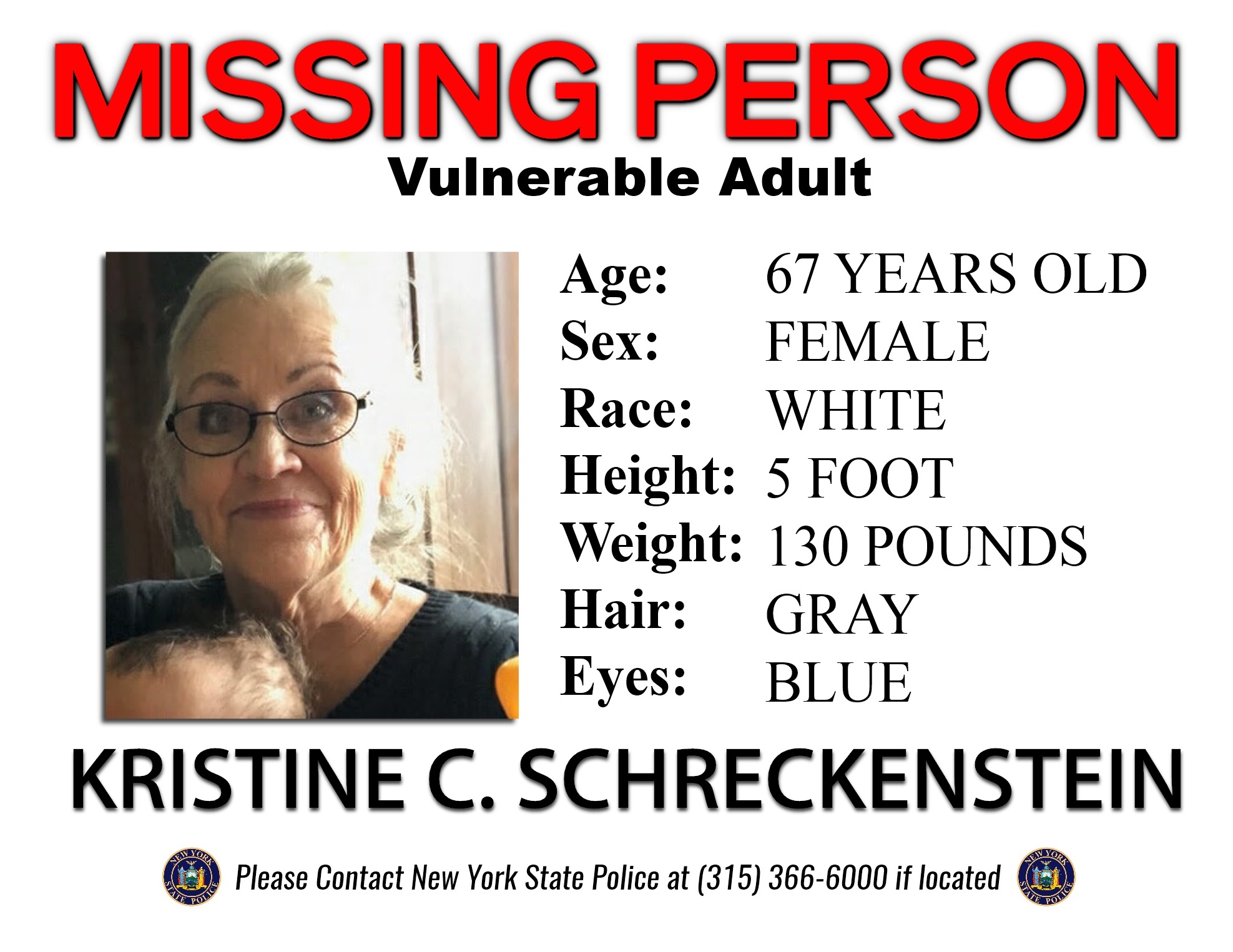 State Police in Oneida is searching for Kristine C. Schreckenstein, 67, who was reported missing by family members April 23, 2019, from a residence on Mosquito Point Road in the town of Stockbridge.

Schreckenstein is described as 5 feet tall, 130 pounds, with gray hair and blue eyes.  She may be operating a red 2001 Audi TT with New York registration EBG-8474. If anyone knows the whereabouts of Schreckenstein, they are asked to contact state police in Oneida at 315.366.6000.

Five Individuals Arrested following an armed robbery investigation
On Wednesday, April 24, 2019, at 12:12 p.m., State Police in North Syracuse responded to 357 Chestnut Street in the town of Clay for a reported robbery in progress.

The investigation has revealed the 31-year-old pregnant female victim had answered the door of her residence, when a male subject broke through the storm door, held a knife to her neck and demanded money. The male suspect, along with four accomplices then left the residence in a dark colored sedan last seen traveling on Chestnut Street. The victim, who was an acquaintance of one of the suspects, was not injured.

Investigators quickly identified the five suspects and determined their location at a local hotel in the town of Salina.  State Police K9, Investigators and uniform patrols responded to the hotel and took all three suspects into custody without incident.

The following individuals were arrested and charged with Robbery 1st degree, a class “B” felony:

Jessica L. Hill, age 34, from 205 Leonard Street Mattydale, NY was charged with Criminal Possession of a Weapon 4th degree, a class “A” misdemeanor and issued an appearance ticket.

Morrison, McClusky, Gary and Briere were transported to the Onondaga County Justice Center for centralized arraignment.

Investigators charged 24-year-old Walter D. Zeller with two counts of promoting a sexual performance by a child, a class D felony. Zeller was arraigned in Theresa Town Court and was released under the supervision of probation.

On April 10, 2019, a search warrant was executed at Elhage’s residence based on an investigation conducted by the Internet Crimes against Children Task Force.  Investigators located numerous images of children less than 17 years-old engaging in sexual conduct.