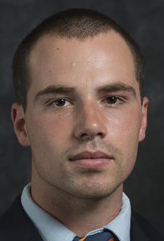 Matt Rogers returns to Empire 8 competition in the spring 2020, joining the Mustang football staff as the offensive coordinator for the upcoming season, as announced by head coach Ed Raby.

“I’m extremely excited to add Matt as our offensive coordinator,” Raby said. “He brings a variety of offensive experiences, a New York recruiting background, knowledge of the Empire 8, and is from the Section III area. His work ethic, intelligence, and leadership skills were clearly visible throughout the interview process. There is no doubt in my mind that our offense will continue to thrive under his leadership.”

Rogers comes to SUNY Morrisville from Wilkes University where he served as the running backs coach, assisting with video breakdown, and recruiting in Northern and Central New Jersey, as well as Western Pennsylvania.

Under his assistance, Wilkes made their first post-season appearance in nine seasons this past fall.

Prior to his stint with the Colonials, Rogers spent three seasons at Utica College as the running backs coach, where he assisted with positional preparation, game film evaluation, relaying play calls, organizing positional practice time and recruiting throughout New York state.

For two seasons, he served as head coach of the JV program, while fulfilling roles as offensive coordinator and travel coordinator. During his time with the Pioneers, Rogers coached two All-Conference players while also helping the program to two postseason appearances, including the first-ever playoff win in 2018.

In the spring 2019, Rogers served as the special teams coordinator for the Pioneers, implementing processes for Utica to apply to the fall season. He also became Bigger, Faster, Stronger certified in January 2017.

Rogers returned to the sidelines for the Pioneers following graduation from Utica in 2016 with a degree in journalism. For three seasons he donned the blue and orange jersey at quarterback, while maintaining a position as a member of the UC Football Leadership Council.

His team efforts landed him the Matt Dunn Pioneer Award, as voted by fellow teammates. Three times throughout his career he was named to the Empire 8 president’s list.

Rogers earned his master’s in liberal studies from Utica in 2019.