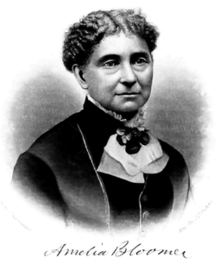 This week, Dr. Pamela Poulin will present her feature, “Amelia Jenks Bloomer: More than Just a Dress,” via video at 7 p.m. Friday, Aug. 21, 2020, followed Saturday, Aug. 22, by a live question-and-answer session via Zoom at 2 p.m.

Funded in part by a grant from Humanities New York, the series features four speakers and a traveling exhibition.

“Many women of our region played a tremendous role in the fight for suffrage,” said CLCBM Director Joe Treglia. “The women’s suffrage movement has promoted human welfare in numerous ways. It has stimulated social and political reform through individual and group civil action.”

Poulin is a professor emeritus at the Johns Hopkins University Peabody Conservatory of Music and continues a career in music as a soprano soloist. She earned her doctorate at the Eastman School of Music of the University of Rochester. She is an actress and does first-person portrayals of women’s rights advocates Bloomer, Matilda Joslyn Gage, Alice Paul (women’s right-to-vote amendment) and Mary Pickersgill (designed and made the 30-foot-by-42-foot flag which inspired the Star-Spangled Banner).

Bloomer was a women’s rights and temperance advocate. Bloomer’s dress reform of the shortened dress and trousers was called Bloomers because pictures of her and others first appeared in “The Lily” the first newspaper owned, edited and published by Bloomer. According to Norman Dann, Ph.D., of Peterboro, women in trousers was the single most important thing that influenced men’s thinking of women in the 19th Century, which were worn until 1900.

Due to COVID restrictions, limited seating will be available at CLCBM, (masks and social distancing enforced). Pre-register is required by calling CLCBM at the number below.

In addition to the speaker series, a traveling exhibit, “Votes for Women: Celebrating New York’s Suffrage Centennial,” will be on display at the Visitor Center at CLCBM.