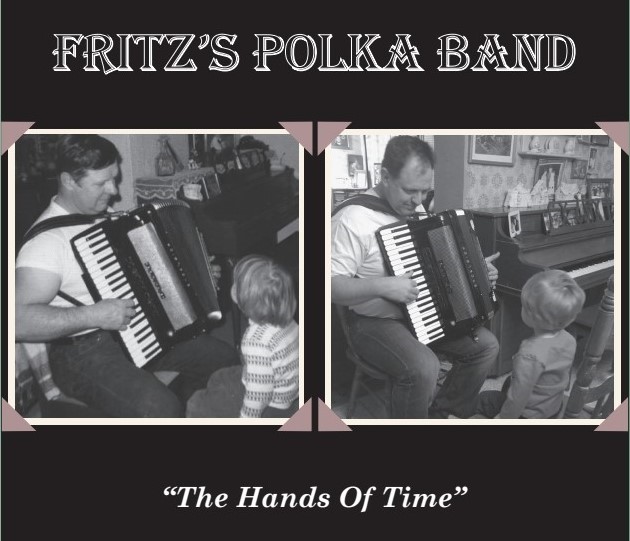 In addition, the late Fred Scherz, Sr., will be featured on one tune. “The Hands of Time” will be available at FPB gigs, by direct order from FPB and from various online outlets, which will be announced as the release date draws closer.

“I’m beyond excited that this recording is finally scheduled to be released,” said Fritz Scherz, bandleader of Fritz’s Polka Band. “As has been already documented, my initial plans were to release a double album in honor of our 40th anniversary back in 2018; however, due to the hectic schedules of some special guests, I ultimately decided to release “Hey!” in 2018 and then hold what would ultimately become ‘The Hands of Time,’ until I could get all the special guests that I wanted to record their parts. It was well worth the wait, as each of the special guests exceeded my expectations.

“I can’t thank these special guests enough for not only taking the time out of their busy schedules to record for this album, but also for how willing they were to do so. To think there’s an artist like my friend, Joe Bonamassa on it who’s had more than 20 number-one blues albums, to a friend like Deen Castronovo who’s not only in Journey, but has taken part in albums that have gone platinum; from a friend like multi-Grammy winner Joey Miskulin, whom I’ve known for more than 40 years and has recorded for the likes of Garth Brooks, Johnny Cash, Paul McCartney, Walter Ostanek, Shania Twain, U2 and Frank Yankovic to name just a few.

“One special guest I’m extra excited about is my son, Freddy, who’s just 7 years old! He played so nicely on a Swiss tune my dad wrote.”

Oct. 14, 2018, marked the 40th anniversary of Fritz’s Polka Band. FPB made history in 1999 by becoming the first polka band to play at a Woodstock Festival. FPB appears on “The Manchurian Candidate” DVD, released in 2004. In 2011, FPB had two songs (‘Grandparent’s Polka’ and ‘Here Is Fritz’s Polka Band’) included in two episodes of the TV show “Breaking Bad.”