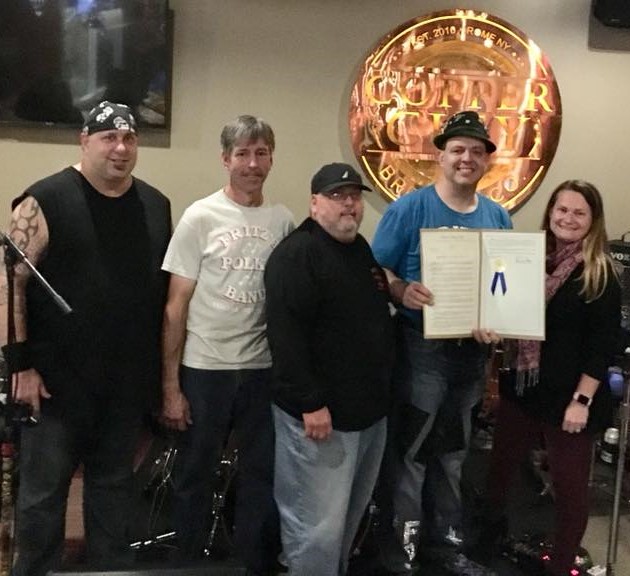 Fritz’s Polka Band of Verona, was presented with a state of New York Legislative Resolution by New York State Senator, Joe Griffo on October 19. De Anna Stafford (from Senator Griffo’s office) handled the presentation prior to Fritz’s Polka Band performing that night at Copper City Brewing Company in Rome. The resolution read in part as follows: “Whereas, It is the sense of this Legislative Body to recognize and commend those musicians who have brought entertainment and cultural enrichment to the citizens of the great State of New York; and Whereas, Attendant to such concern, and in full accord with its long-standing traditions, this Legislative Body is justly proud to commemorate the 40th Anniversary of Fritz’s Polka Band…”

“This was quite an awesome surprise,” said Fritz Scherz, band leader of Fritz’s Polka Band. “For my band to receive statewide recognition for our 40th anniversary by the legislature is quite amazing! Big thanks to Senator Griffo for making this happen! Joe has been a friend of ours for many years and has always been there for us…whether it was putting in a good word for us with Michael Lang prior to Woodstock ’99 or doing an Oneida County proclamation to honor my band for our 25th anniversary back in 2003 or when he honored my Dad, (the late Fred Scherz Sr.), for being the first person in New York State to be inducted into the National Cleveland-Style Polka Hall of Fame in Euclid, Ohio in 2004. It’s truly an honor be friends with Joe!”

October 14, 2018 marked the 40th anniversary of Fritz’s Polka Band! FPB made history in 1999 by becoming the first polka band to play at a Woodstock Festival.  FPB has made 18 recordings and appears on “The Manchurian Candidate” DVD, released in 2004. In 2011, FPB had two songs (‘Grandparent’s Polka’ and ‘Here Is Fritz’s Polka Band’) included in two episodes of the TV show, ‘Breaking Bad’.  In 2013, FPB released their 18th recording, a double live CD entitled, “The WSKG Sessions”. Last year, FPB was nominated for three Just Plain Folks Music Awards and each member was nominated for national awards by the Cleveland-Style Polka Hall of Fame. In August 2018, FPB and each band member were again nominated for national awards by the CSPHOF.