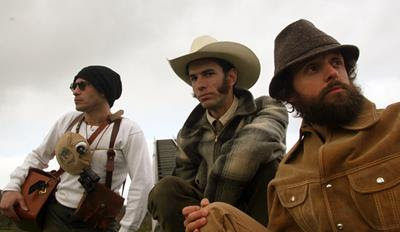 This tour is in support of their new release, Grown-Up Situations.  Written and arranged over the winter of 2017, Grown-Up Situations is a song cycle about getting older and trying to stay connected in increasingly turbulent and isolated times. Recorded live-to-tape by legendary recording engineer Steve Albini, the songs are unrelenting, heavy and patient with dark introspective lyrics laid bare by raw vocal performances over simple powerful arrangements.

The Wiyos have been touring and recording since 2002. They were one of the first “old-timey” bands to emerge on the national scene in the first wave of acoustic bands riding the renewed popularity of early swing jazz, rural folk, old-time blues and Appalachian music. Their relentless touring in the US and Europe, and numerous critically acclaimed albums and EPs landed them a full 28-day summer tour as openers of the 2009 Bob Dylan Show. The Wiyos were also featured in the BBC television documentary, “Folk America – Hollerers, Stompers and Old-Time Ramblers”. In 2010 they were featured in the BBC television special “No Sleep ‘Til Yell”.

Since 2010, the trio of Michael Farkas, Teddy Weber and Seth Travins have released 3 albums and taken their spirited live show on numerous US tours and five UK tours. Their music has been featured in television, movies and commercials in the US and abroad. They have also been featured in three educational Carnegie Neighborhood programs at Carnegie Hall. The Wiyos interactive educational workshops have taken them from elementary schools to colleges throughout the US and UK.