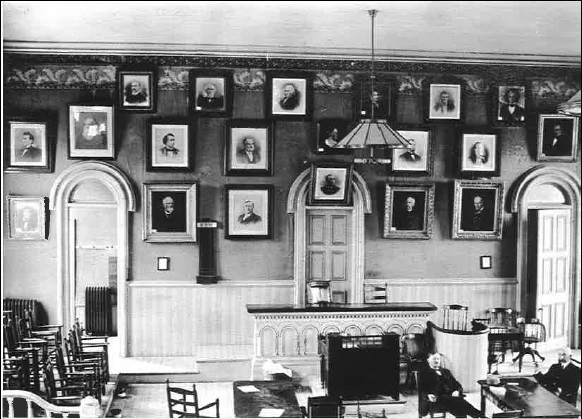 Earlier this week, I had the opportunity to visit Buffalo State University’s Art Conservation Department to pick up a third painting of a series of paintings that once hung in the Madison County Courthouse.

Pictured are: the courthouse in Morrisville circa the late 19th/early 20th century; before and after images of the painting recently picked up and of Buffalo State University Art Conservation Student Nicole Flam.

When the courthouse underwent renovations in the 1960’s many of the portraits were put in storage. Unfortunately when the renovations were complete they were forgotten about until early in the 21st century.

By that point, some of the paintings had disappeared and many were significantly damaged or altered. Four of the paintings were sent to the New York State Preservation and Conservation Center at Peebles Island State Park in Waterford to find out what it would take to restore the paintings.

When the estimated cost to restore the paintings was placed at north of $10,000 on average it was determined that it was not feasible to restore them at this point and they were once again returned to storage.

Later the county was told of a program at Buffalo State University which charged significantly less but took longer than the average restoration. The program trained students who wanted to make a career in the restoration of paper, art and artifacts.

I took our first painting out around 2014 and have since taken three more. The partnership has been beneficial for both parties as it allows us to save significant amounts (in some cases north of 90%!!!) while making sure these pieces are maintained for the public and projects like these allow students to develop their skills working on historic pieces.

The most recent painting that was returned from Buffalo State was a portrait of Benjamin Franklin Chapman a judge from Clockville and later Oneida. The painting was assigned to student Nicole Flam, now a 2nd year student in the program. According to the examination report the painting was.

“…in good condition overall…The Canvas has some bulging areas along the bottom edge. There are several losses in paint layer extending down to the bare canvas and varying degrees of craquelure throughout. There is a heavy layer of dirt and splattered accretions on the entire surface of both the painting and the frame. There are several large losses of the leading edge of the frame and two screw eyes protruding through the front.”

The image taken before shows a frame that is in rough shape, with an image that appears to be very dark in nature (that would be the layer of dirt). The process of cleaning the portrait included utilizing a low-suction vacuum with soft bristled brushes.

Following that, Flam applied a solution of triammonium citrate in deionized water to the portrait with hand-rolled swabs. The student performed this action three times to remove as much dirt as possible. Flam then worked to remove a layer of varnish utilizing an organic solvent mixture and tissue paper. By placing the solvent mixture on the tissue paper and then applying it to the painting the mixture had longer contact with the varnish and removed more of it.

This treatment removed the majority of the varnish. Flam then moved to repair the bulges with heat, moisture and pressure as necessary. She then filled in minor areas of loss with paintable fill material and sprayed a protective coating over the painting.

The frame was cleaned with the low-suction vacuum and soft bristled brush as well. Then a lightly dampened brush and cleaning solution was utilized to clean and followed up by being wiped with a sponge dampened with deionized water. The screw eyes were removed and filled with putty. Flam then took and made a mold of the existing decorative components so that she could recreate the trim in other spots. Plaster was poured in the molds and allowed to set. Upon completion they were toned utilizing Golden Paints and installed creating a near flawless recreation.

Small things pop when seeing the restored painting including the buttons his coat and the vivid gold color of the frame. Because of this partnership with Buffalo State University’s Art Conservation Program we are capable of restoring more paintings that if we went to a private conservator. We are grateful for the hard work that the students put in and hope that people appreciate both the art and the history that will be on display in our courthouse when it reopens in 2019.

Want to learn more about the restoration process? Feel free to contact Madison County Historian Matthew Urtz at 315-366-2453 or by email at matthew.urtz@madisoncounty.ny.gov.