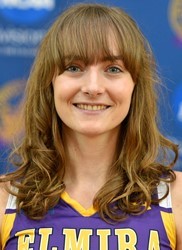 Elmira College field hockey has been honored week-after-week for its outstanding efforts in the classroom, and this week that trend continued with Liz Shephard ’21 being named as a Zag Field Hockey/ National Field Hockey Coaches Association Division III Scholar of Distinction.

Shephard becomes the first Soaring Eagle to receive the honor since former teammate Sarah McCaffrey ’18 earned the award two consecutive years in 2017 and 2018. After being named to the Zag Field Hockey/NFHCA Division III National Academic Squad last week, Shephard became one of just 268 student-athletes from across the country to receive the Scholar of Distinction honor. On the field, Shephard was just as impressive, as the sophomore earned Empire 8 All-Conference Honorable Mention Accolades this fall.

In order to be named a Division III Scholar of Distinction, student-athletes needed to have achieved a cumulative grade-point average of 3.9 or higher through the end of the first semester of the 2018-19 academic year.