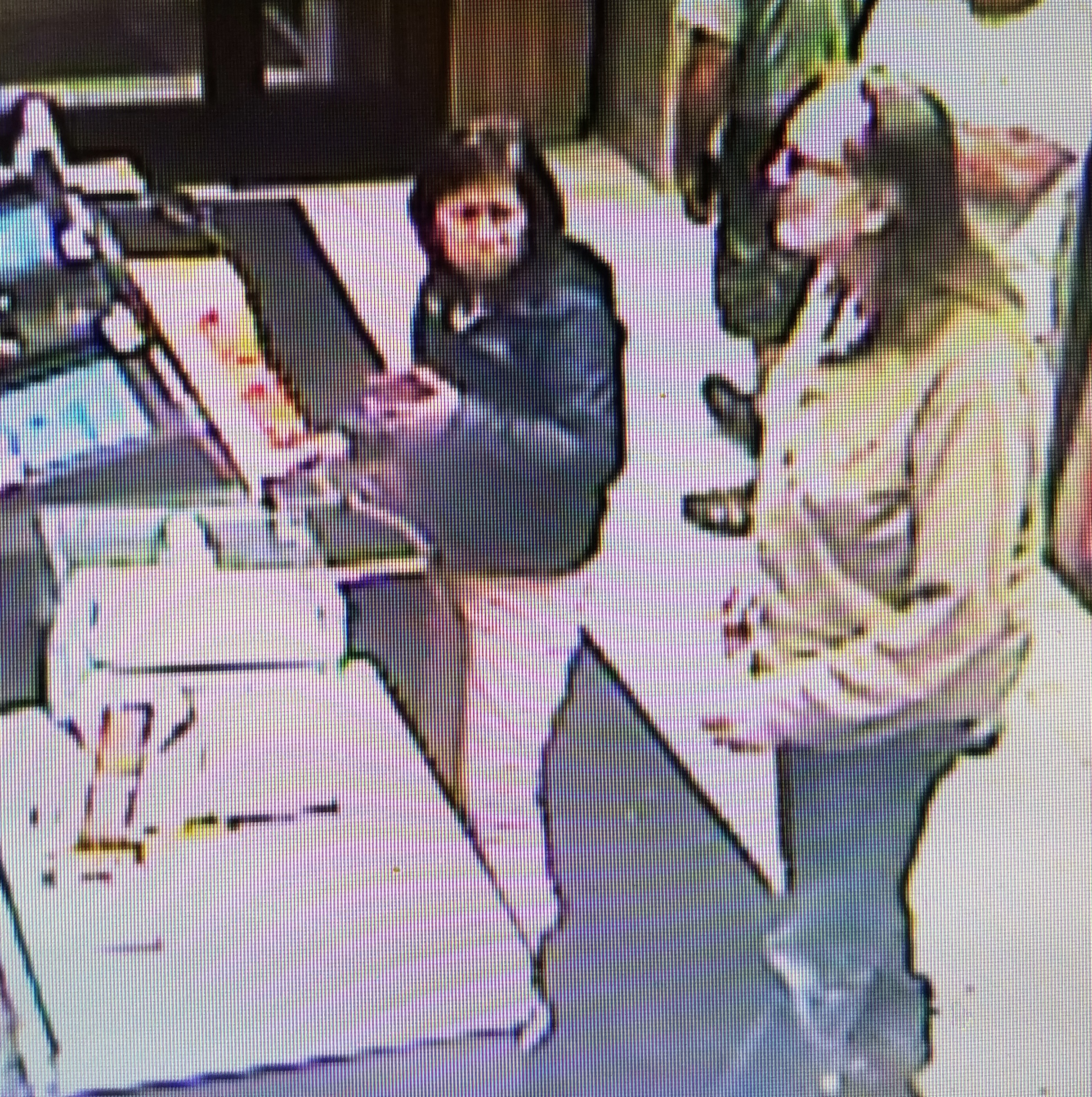 State Police in Pulaski is attempting to identify the two individuals in the surveillance photos above.

On Saturday, August 31st, two customers at the McDonalds in the village of Pulaski left an envelope with cash inside in the lobby area.

On September 13, 2019, at approximately 6:15 pm Troopers along with Madison County Sheriff Deputies responded to Canal Road in the town of Madison for a report of male subject on the side of the road yelling and throwing items. Upon patrols arrival, they observed a male suspect walking around a NYSEG power substation and damaging wires to the building with two machetes. As the subject observed the officers, he retreated to his vehicle, a 2012 Gray Dodge Journey, and fled. Troopers and Deputies attempted to stop of the suspect vehicle on State Route 20. However the driver refused to comply.

As the suspect vehicle continued into Herkimer County, Troopers deployed a Stinger Spike System as the vehicle entered the village of Herkimer which was successful in flattening one tire. The suspect vehicle then pulled into a parking lot and stopped.

The suspect, identified as Corey D. Streeter, was taken into custody without further incident. He was arraigned in the town of Hamilton Court and remanded to the Madison County Jail.

On September 13, 2019, at approximately 4:14 P.M. State Police was requested by Town of Webb Police Chief Ron Johnston to assist with a serious injury crash that occurred in the Ace Hardware store parking lot on State Route 28 in the village of Old Forge.

Preliminary investigation at the scene revealed a 2005 Dodge Ram pickup truck, operated by Peter S. Gaffney, age 48 from Old Forge, NY was traveling south on State Route 28 in the village of Old Forge when he was making a right hand turn into the parking lot of the Ace Hardware store, he failed to see a 10-year-old male riding a bicycle northbound on the sidewalk. The child was struck with the front passenger side of the pickup truck and was trapped under the vehicle for an extended period. The child was airlifted to Upstate University Hospital in Syracuse with internal injuries and is listed in serious condition.

Due to the particulars of the case, The driver involved is a town DPW supervisor. The child’s father, being a retired member of the Webb Police Department, Chief Johnston requested the investigation be handled by the New York State Police.

The investigation is continuing.

On September 17, 2019, the New York State Police arrested Lucas C. Tzivanis, 23, of Syracuse, NY, for 10 counts of Attempted Disseminating Indecent Material to a Minor 1st degree. This arrest resulted from an investigation that was conducted by the New York State Police Troop B Computer Crimes Unit and the State Police Bureau of Criminal Investigation. Tzivanis was found to have electronically sent numerous photos and videos containing sexual content to a minor.

This investigation is ongoing and more charges are pending. If anyone has information regarding Tzivanis or this investigation, they are asked to contact State Police at (518) 873-2750.

On September 17, 2019 State Police responded to a report of a stabbing which occurred at the Woodhaven Apartments located at 4580 Onondaga Blvd in the Town of Onondaga. Initial investigation revealed that a female victim had been cut across her neck by a box cutter. The victim was able to escape the apartment and was transported by a private vehicle to Community General Hospital. She was then transferred to SUNY Upstate University Hospital, where she underwent surgery. Her injuries are not considered to be life threatening.

The suspect, identified as Devine D. Coger, had fled the scene prior to the arrival of patrols. He was ultimately located on September 18, 2019, at a residence in Troy, NY where he was arrested without incident. He was transported back to Onondaga County and charged with Assault 1st degree, (a class “B” felony), and Criminal Possession of a Weapon 3rd degree, (a class “D” felony). Coger was transported to the Onondaga County Justice Center to await Centralized Arraignment.

On September 19, 2019, at 6:08 p.m., State Police responded to a reported car/bicycle crash on State Route 12 in the town of Alexandria, Jefferson County.

The bicyclist, Glenn F. Hawn, age 63 from Spencerport, NY was transported by Lifenet Helicopter to Upstate University Hospital in Syracuse where he succumbed to his injuries.

State Police has determined no alcohol or drugs were involved in the crash and no charges will be filed against the driver of the vehicle.

Lisa Hunt is charged with driving a GMC pickup truck on State Route 971V in the town of LeRay, and attempted to strike a 2000 Chevy Silverado pickup truck as the vehicle was crossing the bridge into Felts Mills. The 18-year-old female complainant stated she took evasive action to avoid the collision and drove towards the side of the road, causing her vehicle to strike the guide rail. The driver and a 5-month old passenger were not injured, however, there was damage to the front passenger side of the truck.

Troopers determined the complainant was the protected party in an order of protection/stay away order against Mrs. Hunt.

State Police in Watertown are investigating a larceny that occurred September 20, 2019, at the Walmart Store in Watertown. The unknown suspect selected several items of merchandise, placed them into a cart, and passed all points of sale before exiting the store without rendering payment.

If anyone can identify the individual and/or vehicle in the store security photos, they are asked to contact State Police at (315) 366-6000.

On September 21, 2019, at approximately 7:10 a.m., Pastorell entered the TOPS gas station on Brewerton Road in the town of Clay and forcibly stealing approximately $90 from the cashier. He then left the scene in a black Chevrolet Malibu.

At 10:45 a.m., Pastorell entered the Burger King on Thompson Road in the town of DeWitt approached the cashier and demanded money. Following a brief struggle with the cashier, Pastorell lunged over the counter and grabbed the cash drawer and left. The female cashier was treated at the scene for a wrist injury and released.

At approximately 1 pm, Pastorell’s vehicle was located on 1st North Street in the city of Syracuse by an Onondaga County Sheriff’s Deputy. Pastorell came out of a nearby residence and surrendered himself to Troopers and Sheriff Deputies without incident. Pastorell was taken to the State Police Barracks in North Syracuse for arrest processing and transported to the Onondaga County Justice Center for centralized arraignment.

State Police was assisted at the scene by members of the Onondaga County Sheriff’s Office and the Village of North Syracuse Police Department.

On September 21, 2019 at approximately 9:11 pm, State Police responded to State Route 49 in the town of Marcy for an unconscious male/possible drug overdose in a vehicle.

When Troopers arrived, an off duty EMT was administering aid to the driver, 39-year-old, Harry Rodriguez outside of his 2003 Jaguar. Rodriguez was unconscious and unresponsive with a strong odor of alcohol emitting from him. Two doses of Naloxone were administered for Rodriguez to regain consciousness. Rodriguez was transported by Kunkel Ambulance to Saint Luke’s Hospital for further treatment.

On September 23, 2019, Investigators arrested and charged a 16-year-old with Assault 1st degree, a class “B”felony. The suspect was arraigned in juvenile court.

On Monday, September 16, 2019, at approximately 7:35 PM, State Police responded to the area of 106 East Molloy Road in Mattydale for a report of a 16-year-old male that had been stabbed in the stomach.

The investigation has revealed that three suspects were involved in an altercation with multiple youths and during that altercation, the 16-year-old was stabbed in the stomach. The 16-year-old was transported to Upstate University Hospital where he is listed in stable condition.

The investigation is ongoing and anyone with information is asked to contact State Police at (315) 366-6000. All information will remain confidential.

State Police in Remsen is investigating a larceny that occurred September 14th at Fastrac on State Route 28 in the town of Webb. The two individuals are wanted for questioning in the larceny of (2) cases of Twisted Tea, (2) Jumbo Beef sticks and a pack of Beef Jerky.

If anyone can identify the individuals in the store security photos, they are asked to contact State Police at (315) 366-6000. All information will be kept confidential.

State Police in Herkimer is investigating a Criminal Mischief/Cemetery Desecration case that was reported September 18, 2019, by the Ukrainian Orthodox Cemetery on Smallsbush Road in the town of Herkimer.

A large granite stone was discovered damaged by maintenance personnel. The cost of damage to the headstone is believed to be more than $10,000.

If anyone has information as to who may have caused the damage is asked to contact State Police BCI in Herkimer at (315) 866-7275.

The accident investigation has revealed a 2010 Ford, operated by Tanya Pierre was traveling southbound on I-81 at a very slow speed due to heavy traffic conditions when a 2014 Dodge, operated by Cody A. Mothersell, who was also traveling southbound on I-81, failed to observe the Ford vehicle stopped in traffic, and struck the rear of the vehicle. Upon being struck, Mrs. Pierre steered the vehicle to the left to avoid striking the tractor/trailer in front of her, causing her vehicle to strike the guiderail along the east shoulder of the roadway. Both vehicles slid along the guiderail for approximately 75 feet before coming to rest.

Cody A. Mothersell, age 28 from Syracuse, NY and a 22-year-old passenger, Mark A. Rodriguez were transported to Upstate University Hospital with non-life-threatening injuries. Mothersell was issued traffic tickets for following too closely and for failure to reduce speed under special hazards.