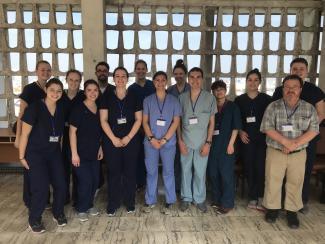 The students, all members of Clarkson’s Doctors without Borders club, which organized the trip, donated their time at Thng Nht Hospital.

Clarkson’s DWB, which has been traveling since 2012 to destinations like South America and Central America, is not an affiliate of the international organization. It is a local club, focused on delivering healthcare to low income or underserved people, both internationally and nationally.

“We volunteer during the summer for two weeks at various clinics and hospitals,” says Victoria Olsen ’19, a biomolecular science major from Watertown. “We learn about how medicine is practiced and sometimes get hands-on opportunities to gain experience for our professional fields.”

“When we do clinical work, we try to help underserved communities,” said Kane. “It’s also a good step for pre-med students, pre-PA, pre-dental or pre-PT to get their foot into the water a little earlier than you can in the United States. You can take that knowledge and build on it here as a professional in the U.S.”

Thng Nht is a large public hospital in Ho Chi Minh City that was built about 1975, just before the fall of South Vietnam.

“This is the first trip outside of Latin America for the group, which learns about healthcare in the developing world and underserved areas in the U.S.,” says Professor and Chair of Biology Tom Langen, who accompanied the students abroad. “They turn that into an experience in which they can learn about medical care in contexts that they can bring back into their own future practice.”

“It was mainly observational, this year, but some of the students also did some hands-on,” says Langen. “For example, rehabilitation students gave ultrasonic massages and some students learned about traditional medicine — herbal medicines and acupuncture — and how to remove acupuncture pins and leads.”

The students were divided up into pairs and assigned to different areas of the hospital. Each student also had an opportunity to be in the operating room for at least one day.

“We would go into the hospital each day from around 8 a.m. to about 3 p.m. and choose a department,” says Renee Levy ’19, a biology and psychology double major from Buffalo. “It was a huge learning experience for us. We would try and help out wherever we could. A lot of times I would go in the mornings to the cardiothoracic surgical department and then in the afternoons I would go down to the physical therapy and rehabilitation unit.”

“I was in the gastrointestinal surgery department because I think that’s what I want to go into,” says Kane. “I got to shadow consults and everybody got into the operating room for at least one day. You got to scrub into operations throughout the whole day, so you got to see a lot of different procedures.”

“I got put into the department for traditional medicine, which was traditional eastern medicine and really interesting to learn about,” says Olsen. “I saw a lot of acupuncture, which a lot of people in Vietnam use as medicine to treat back and joint pain. I got to help out a lot because I gained the trust and the nurses, doctors, and patients were really comfortable with me being there.”

Some of the students already had medical experience due to their work on the rescue squad, in the emergency room or in other clinical environments. They were familiar with a number of procedures and could interact with doctors about differences between their experience in the U.S. and at the Vietnamese hospital.

“A lot of us that took anatomy were like ‘Oh, my gosh! We learned about this muscle group,'” says Olsen. “Other things we do as a club — like taking vitals and blood pressures — helped us understand what was going on too.”

“Students who were in the rehabilitation and therapy area were quizzed by the doctors about their knowledge of the muscular-skeletal system and the anatomy and physiology that they’ve done at Clarkson,” says Langen. “The doctors were impressed by how knowledgeable they were. Our students were also able to show that they understood some of the pharmaceuticals in a way that I think may have surprised some of the medical staff. “

The Clarkson volunteers did find some aspects of the Vietnam hospital surprising. “When we went into the OR, we changed into hospital scrubs,” says Olsen. “But all of the doctors and nurses wore special sandals without socks. Also, it was air-conditioned in the OR, but the rest of the hospital had limited air conditioning, which was also very surprising, as it was about 95 degrees outside and very humid.”

The students say they hope to take the lessons they’ve learned in Vietnam and other countries and apply them in their future careers.

“Probably the biggest thing I’m going to take out of the trip is understanding how medicine is practiced socially in Vietnam and other countries I’ve been to in South America,” says Olsen. “If I ever come across patients who aren’t familiar with how medicine is practiced in the U.S., it will help me understand where they’re coming from. These trips have also inspired me to continue going on them as a future medical professional.”

“Volunteering and helping out in other countries strengthened my love for medicine,” says Levy. “This is an opportunity that definitely gave me more exposure into other areas and other specialties, but I still think that I would like to go into orthopedics.”

The trip was completely student-organized and student-led. “I came as a faculty advisor,” says Langen, “but the reality is that the students organized the whole trip. They showed a great deal of planning, responsibility, and professionalism. They’re good representatives of Clarkson.”

In their downtime, the group had some time for recreation. They traveled to Phu Quc island, a Vietnamese island off of Cambodia known as “Paradise Island,” where they went coral-reef snorkeling. They also visited the Cu Chi Tunnels, which were part of the tunnel system that the Viet Cong developed during the Vietnam War for defense

“Overall, it was a really great trip for everybody and we learned so much in the medical field and from a cultural perspective as well,” says Olsen. “Vietnam is a really great country to visit. Everybody had an amazing time.”

As a private, national research university, Clarkson is a leader in technological education and sustainable economic development through teaching, scholarship, research and innovation. We ignite personal connections across academic fields and industries to create the entrepreneurial mindset, knowledge and intellectual curiosity needed to innovate world-relevant solutions and cultivate the leaders of tomorrow. With its main campus located in Potsdam and additional graduate program and research facilities in the New York Capital Region, Beacon and New York City, Clarkson educates 4,300 students across 95 rigorous programs of study in engineering, business, the arts, education, sciences and health professions. Our alumni earn salaries that are among the top 2.5 percent in the nation and realize accelerated career growth. One in five already leads as a CEO, senior executive or owner of a company.