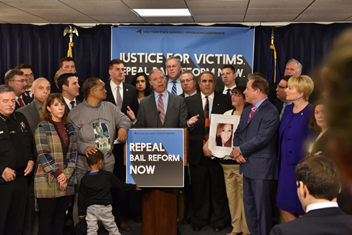 Assemblyman John Salka (R,C,Ref-Brookfield) attended a press conference held by Assembly Minority Leader Will Barclay (R,C,I,Ref-Pulaski) and the Assembly Republican Conference to call for the full repeal of the bail reform measures from last year.

Salka stands with his peers to prevent events like the hit-and-run on Christmas Eve, which resulted in the death of a mother of three and the release of a man last week who allegedly shot and killed his girlfriend in front of their 4-year-old daughter by sponsoring legislation (A.8855) to protect all New Yorkers.

“Standing next to grieving family members really drives home the need to repeal this law,” Salka said. “People’s families are being devastated and innocents are being assaulted in the streets. This is a breakdown of public order and rests solely at the feet of the Democrat lawmakers who passed this reform last year.

“It’s not too late to repeal the law before more harm is done to blameless New Yorkers. Side with citizens: not criminals.”

Salka said he also was thrilled to announce a $50,000 grant for the town of Vernon to assist bringing the Vernon Center Water District up to code. Water sources have been contaminated by a large salt site and, due to the unsafe drinking water supplied to residents, they need access to a safe and secure body of water.

Salka said he is determined to help extend the public water line out to the affected parts of the town and ensure everyone has a safe and reliable source of water.

“This is a public safety matter that demands all of our attention,” Salka said. “Securing this money to ensure that all residents have a safe and drinkable source of water is a step in the right direction.

“I’m confident that by working with town officials and other state officials we can ensure that nothing like this happens again. Everyone in New York deserves access to a safe and healthy supply of water. It’s common sense.”

One thought on “News from Assemblyman John Salka”