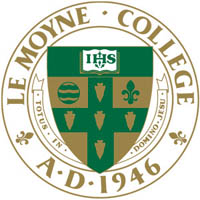 Le Moyne College announced students included on its fall 2019 dean’s list. Among them were:

To make the list, students must achieve a GPA of 3.5 or above.