FROM TOWN HALL: Notes from the Feb. 13, 2020, meeting of the Hamilton Town Council 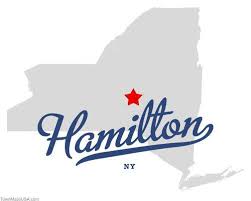 Battling colds and flu, the Hamilton Town Council convened for its regularly scheduled meeting Feb. 13 at the village of Hamilton Courthouse.

During public comments, Earlville Trustee Gerry “Doc” Hayes reported that Earlville, town of Hamilton, Earlville Free Library, Town of Sherburne, Partnership for Community Development and Upstate Institute are collaborating on a community-based study – “Earlville for Earlville” – to engage residents in defining needs and goals for the village and developing a plan to make those projects happen.

Highway Superintendent Luke Dowsland presented Mike Marcellus with a framed resolution from the Council in appreciation for his 25 years of service to the Highway Department.

Shwartz said Marcellus is “always there with a smile,” and that he serves “with dedication and care.”

Dowsland summarized his department’s activity for the month, including 27 plowing and sanding runs and treating town roads with 28,000 gallons of brine, all of which is now produced in-house. The department’s skilled mechanic, Mike Helly, is servicing SOMAC vehicles as time allows, saving money for town taxpayers and improving results for the ambulance corps. The town crew continues its work running electrical wiring and data cabling in the new town office building. With continued fine tuning, solar panels and geothermal are delivering low-cost, renewable energy at the town garage.

Bookkeeper Brynley Wilcox said Madison County paid the town $44,000 for plowing from December through early January, with another $20,000 pending. The Council approved a resolution to have the town join a federally insured, AAA-rated investment pool with other New York municipalities, referred to as NYCLASS. Investing only in the safest instruments, such as CDs and government bonds, the pool improves returns by compounding interest daily while simplifying bookkeeping.

Town Clerk Reymers updated the Council on planned changes to the street lighting in Hubbardsville and Poolville. She will be sending a letter to property owners to alert them to the changes, which are expected in the second half of 2020.

The Council received the annual report of Town Historian Jackson Loop. The notations from his many and varied interactions while collecting and dispensing the chronicle of our town make a good read. A copy is available for review from the Town Office.

Vincent Faraone gave a positive account of operations at SOMAC and briefed the Town Council on future considerations, including ambulance maintenance and replacement, and repairs and enhancements to the SOMAC garage and headquarters. Faraone noted the important service provided by Colgate students and said that SOMAC attracts more student volunteers than any other assignment.

Chris Rossi reported progress toward revising zoning regulations. She also said that the town and village are awaiting certification as Climate-Smart Communities and noted that the Climate Preparedness Working Group would be launching a public information program.

Shwartz updated the Council on the status of construction at the new Town Office Building. The goal is to move in by Aug. 31, 2020. She also reported on negotiations for broadband and on the county’s share of casino revenues.

By unanimous vote the Town Council established polling places for 2020 elections: Districts 1 and 2 will vote at Hamilton Public Library, District 3 will vote at the office of the Earlville Village Clerk, and District 4 will vote at Poolville Community Center.

The next meeting of the Hamilton Town Council is scheduled for 6:30 p.m. Thursday, March 12, in the village courthouse. Meetings are open to the public.\