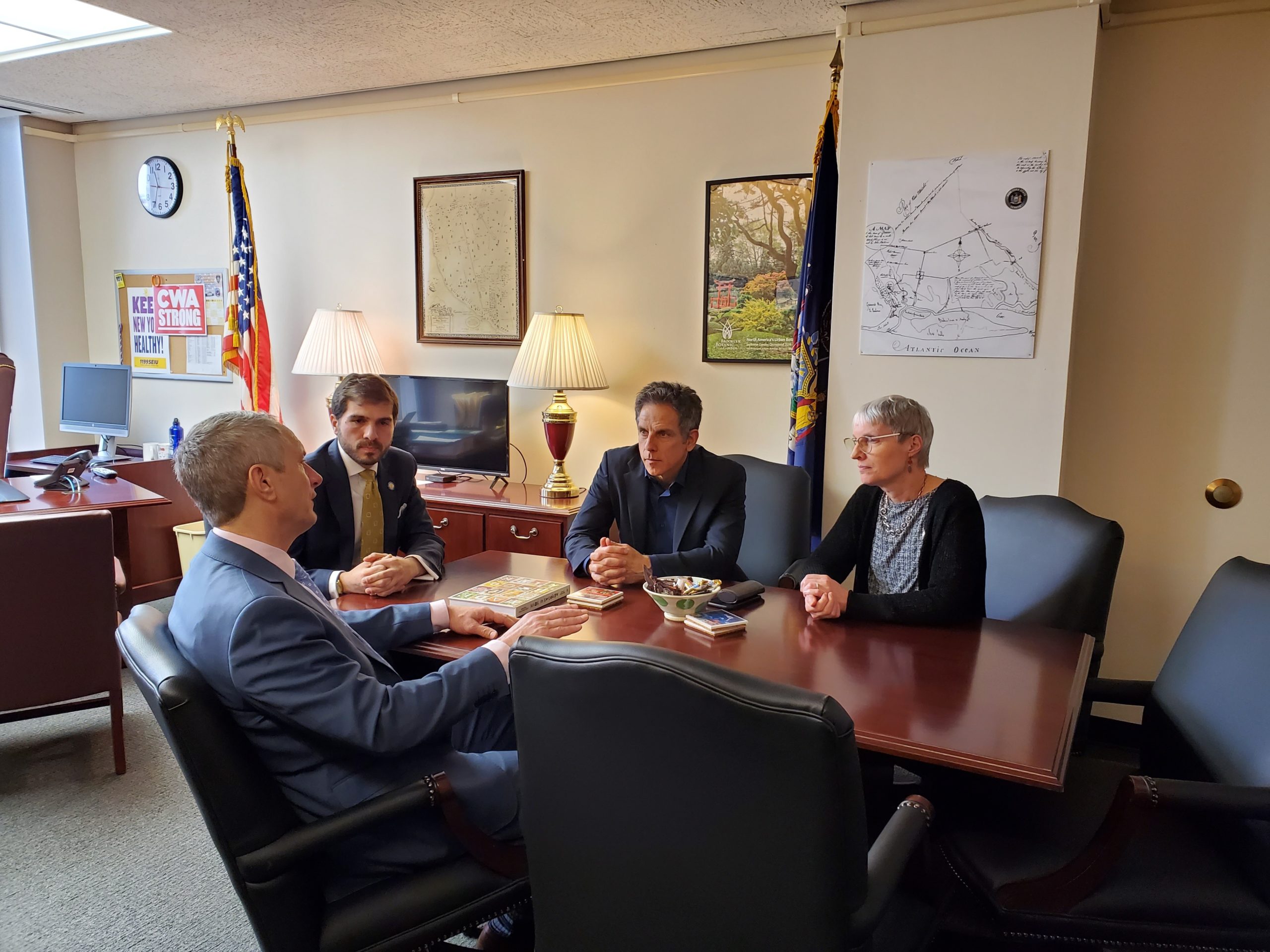 Senators Rachel May and Andrew Gounardes, and Assemblymember Sean Ryan held a press event to advocate for increased funding for the New York State Enhanced Services to Refugees Program. Legislators and advocates were joined by actor and Goodwill Ambassador for UNHCR, the UN Refugee Agency, Ben Stiller.

Refugee resettlement agencies and refugees from Buffalo, Rochester, Syracuse, Utica, Albany, New York City, and Long Island, along with the Fiscal Policy Institute and the New York Immigration Coalition were all in attendance. They urged increased support in the state budget for New York State’s unique program to provide enhanced support to refugees. NYSESRP serves as an economic catalyst for many upstate New York communities, where refugees are a key to economic revitalization and population growth and promotes refugee integration in downstate New York.

The Executive Budget does not include any funding for NYSESRP this year. The coalition is urging $5 million to be included in the budget this year for NYSESRP to help strengthen our economy, continue the revitalization of upstate cities, and allow us to stay true to the commitment New York State has made to being an inclusive and welcoming state for immigrants and refugees, as we have been for centuries.

“Syracuse and Central New York are better places because of the vast contributions of refugee communities,” Senator Rachel May said. “With the federal government working to decimate these vital programs, the state should commit funding to welcome refugees and help them build a life here in their new homes. I thank everyone who came to Albany today to join together and show why we must make this program a priority.”

“Refugees are welcome here in New York state,” Senator Andrew Gounardes said. “Fully funding refugee services is about more than economic growth and development – though refugees do contribute to our economies. It is about what kind of State we want to be. It is about the concept of philoxenia, a Greek word which means ‘love of strangers.’ How we treat others who are going through incredibly difficult times tells us all we need to know about ourselves. We will fight to renew and expand refugee funding in the face of federal cuts and ensure that refugees can thrive in their new homes.”

“New York proudly welcomes refugees from around the world,” Assemblymember Sean Ryan said. “Refugees are helping to grow the population of upstate cities, and are adding to the amazing diversity of communities across our great state. With a federal government determined to roll back progress, it is critically important to continue our support for refugee resettlement agencies in this year’s budget. I’m proud to stand with my colleagues and advocates from every corner of New York to push for continued state investment.”

“The support infrastructure created by NYSESRP funding means refugees who come to Buffalo can get what they need to be successful here, and contribute to the WNY economy and community,” Eva Hassett, International Institute of Buffalo, said. “Without state funding, we couldn’t say this. Additional support means we can work to attract and integrate more refugees to Upstate, benefitting all. New York continues to lead the way, and we are proud.”

“InterFaith Works is grateful for the NYSESRP program which has provided funds that have allowed resettlement agencies to maintain capacity and increased our ability to focus on integration supports for newly settled families,” Olive Sephuma, Director of the Center for New Americans, InterFaith Works of CNY, said. “New York state was unique in its response to the federal government’s retreat from refugee resettlement, adding timely and critical funding that is having a significant and measurable impact on refugee families and on our community. Because of this funding, we are able to provide a myriad of integration services including case management, immigration and employment assistance to approximately 350 visitors a month. We thank Senator May and the Assembly delegation for making NYSESRP a priority in this year’s state budget to make sure this vital program continues.”

“At a time when the federal government has essentially shut the door on our long history of welcoming refugees fleeing violence and calamity, New York state can be a bulwark against intemperance,” Murad Awawdeh, Executive Vice President of Advocacy & Strategy, New York Immigration Coalition, said. “Refugees are deeply embedded in the fabric of our communities socially, culturally and economically. In fact, in upstate New York, refugees have helped reverse population decline, revitalize communities, added to the local workforce, start businesses that create jobs and contribute to the local economy through taxes. A $5 million investment in refugee services, is a re-investment in our state, every community, and our values as a welcoming community committed to supporting every New Yorker to thrive.”

“This is a remarkable, first-in-the-nation program,” David Dyssegaard Kallick, Director of Immigration Research, Fiscal Policy Institute, said. “It turns the sudden downturn in the federal resettlement program into a great opportunity for New York to provide the kind of support that helps refugees who are already here to thrive and at the same time helps the communities they live in to grow.”