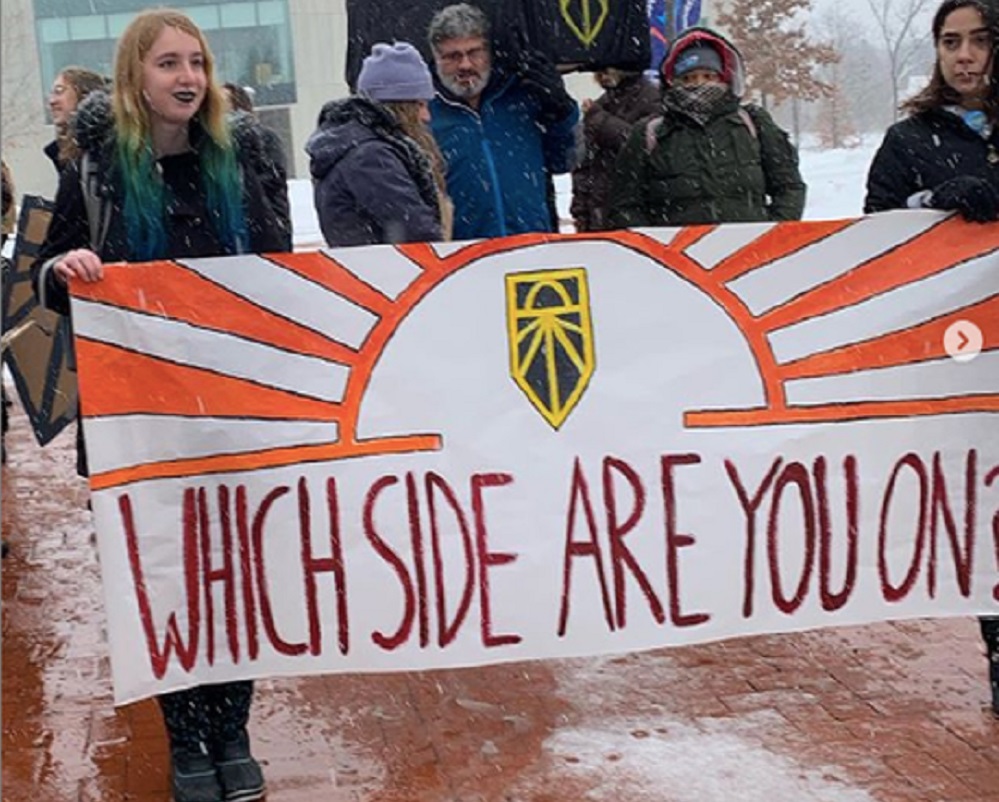 On Friday, March 6, 2020, Sunrise Movement Hamilton College hosted a rally outside the college’s administration building, Buttrick Hall, to demand that the college take action against the climate crisis. About 50 students attended the rally. Demands included divesting the college’s endowment from fossil fuels, reinvesting that same amount of money into renewable energy, recusal of members of the board of trustees with vested interests in fossil fuels from divestment discussions, the publication of a whitepaper explaining the rationale behind not divesting at this time, a policy of consultation between the college and the Oneida Nation when making decisions regarding the college’s environmental impacts and the declaration of a climate emergency by the college.

The rally was aimed at the board of trustees which was on campus for its quarterly meeting. The board and college President David Wippman were invited to attend the rally, with the stipulation that they would only be allowed to speak if they were going to announce a change in policy relating to the list of the demands that the students put out. Wippman attended but did not make any official announcements.

With emcee Emily Fienco, Hamilton College class of 2023, the rally started with an acknowledgement that Hamilton is on the land of the Oneida people and a set of ground rules for behavior at the rally. The first speech was by Sarah Gyurina, class of 2022, who talked about the precedent of student activism on campus, particularly talking about the movement to divest from Apartheid South Africa in the 1980s. This movement led to hundreds of students consistently protesting, 20 students getting suspended for acts of civil disobedience, a lawsuit to overturn these suspensions and, ultimately, the resignation of then-President Martin Carovano.

The strategy of building a movement to fight the climate crisis was a focus in Gyurina’s speech as well.

Malik Irish, class of 2022, Posse Boston Scholar and member of the Black and Latinx Student Union, spoke about the lack of transparency in college decisions across issues. He argued that Hamilton’s decision to not release public statements about student demands mirrored resistance to release a public statement about the elimination of Posse Boston, a scholarship program for student leaders that predominantly included black, indigenous and students of color.

Student Assembly President Tommy Keith, class of 2022, spoke of the need for trustees to listen to student demands and encouraged students to also take action into their own hands in their daily lives by being more environmentally conscious consumers.

The rest of the rally consisted of chants such as “Who’s campus? Our campus!” and songs that asked the board of trustees, “Which side are you on?” In the middle of the event, there was an open mic section where attendees were allowed to take the megaphone and speak their minds. Attendees made statements that called for more transparency in how the college makes decisions, increased respect from the administration for student demands and an invigoration of campus activism at large.

Sunrise Movement Hamilton College intends to continue its fight for their demands soon, including on Earth Day and beyond.

Sunrise Movement is fighting for good jobs and a livable future for our generation.

Join us in fighting the corrupting power of fossil fuel executives and building a Green New Deal.