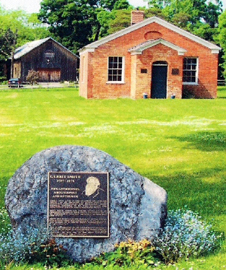 The National Abolition Hall of Fame and Museum has postponed the October 2020 inductions to Oct. 22 through 24, 2021, due to the impact of COVID 19. The 19th century abolitionists to be inducted are Robert Everett, Calvin Fairbank and Stephen Myers.

Induction Weekend will open at 7 p.m. Friday, Oct. 22, 2021, with An Evening of Welsh Music, Food and Historical Reflection on Welsh Abolitionism and the American Civil War. Following lunch Saturday, Oct.ber 23, each nominee and his work, will be described by the nominators during the Abolition Symposia in the afternoon. After the 5 p.m. antislavery dinner, public nominations will be presented for each candidate, and the sponsors will unveil each inductee’s Hall of Fame banner.

Robert Everett (1791-1875) was a Welsh-born American preacher who, at great personal sacrifice and risk, promoted the anti-slavery and equality causes upon his arrival from Wales in 1823. He began preaching against slavery in Utica at what is now the Plymouth Bethesda Church and later in the Remsen-Steuben area at Capel Ucha and Capel Penymynydd. He persevered in the cause despite physical attacks while preaching, injury to his horse and the loss of his home by arson.

Starting in 1840, he published at his own expense a monthly newsletter, Y Cenhadwr Americanaidd, spreading the anti-slavery message to Welsh communities throughout the United States, Canada, Europe, Australia and India. He encouraged Welsh-American citizenship and support of the abolition movement through political action within the new Liberty and Republican parties. He came to believe in and encourage the notion that the Civil War was a moral crusade resulting in nearly exclusive participation in the Union cause by Welsh immigrants and their first- and second-generation descendants. Everett’s writing aided in mobilizing European public opinion in support of the Union cause.  Everett and his family were involved in the Underground Railroad. He was familiar with other abolitionists such as Gerrit Smith and Beriah Green. His sons attended the integrated Oneida Institute at Whitesboro. One son was with John Brown in Kansas. His daughters were teachers in integrated schools and after the war aided freed slaves. Frederick Douglass and Harriet Beecher Stowe considered him a strong voice in the abolitionist movement and allowed him to translate and publish their works into Welsh.

Everett believed and preached that “slaveholding was a sin and that a slave was a man for whom Christ, our Lord died.” He is buried in Steuben Capel Ucha cemetery.

Calvin Fairbank (1816-98) was born in Wyoming County.  He was ordained as a minister by the Methodist Episcopal Church in 1842 and continued his studies at what is now Oberlin College in Ohio.  As a young man, Fairbank became a staunch abolitionist after listening to stories of escape told by two former slaves he met at a Methodist meeting.  He became active in the Underground Railroad in 1837 by ferrying a fugitive across the Ohio River to free territory.  Fairbank worked with the Quaker abolitionist Levi Coffin to help freedom seekers find safety in northern cities or in Canada.  Fairbank went to Kentucky to help people escape from slavery, where he assisted 47 slaves in reaching freedom.  One of those was Lewis Hayden, who became a prominent Boston abolitionist.

Fairbank was convicted in Kentucky on two separate occasions for aiding slaves who wanted to escape.  In the second incident, he was found guilty of violating the Fugitive Slave Law of 1850.   Fairbank was imprisoned for a total of 17 years and four months.  He was brutally treated, suffering solitary confinement, hard labor and regular floggings. It is estimated that he received more than 35,000 lashes in prison floggings.

Fairbank was pardoned in 1864, but the effects of his life in prison took a terrible toll on his health.  His memoir, “Rev. Calvin Fairbank during Slavery Times: How he Fought the Good Fight’ to Prepare The Way,” was published in 1890. He is buried in the Until the Dawn Cemetery in Angelica.

Stephen Myers (1800-70) was born into slavery when what some called “the peculiar institution” still existed in New York. He became free when slavery was abolished in New York in 1827. Thereafter, Myers became active assisting freedom-seekers make their way to Canada. He also joined the organized abolition movement and helped to organize many of the Colored Men’s Conventions of the 1830s and later.

Myers campaigned for voting rights through the New York State Suffrage Association. He also advocated for equal access to schools for African Americans, once suing the Albany schools over segregation. He was the superintendent of a “colored school” in the 1840s. Myers also promoted economic development projects for African Americans, and, during the Civil War, recruited soldiers for the United States Colored Troops.

In addition to being a “station master” and a member of the Albany Committee of Vigilance, Myers promoted abolitionism as a newspaper publisher. The “Northern Star and Freedom’s Advocate” was an important voice in the crusade for freedom and black rights. Myers either published or edited at least seven other newspapers between 1842 and 1859. Myers traveled widely to speak on behalf of issues of freedom and justice. He shared the platform with notable abolitionists such as Frederick Douglass.

Extensive efforts have been made to restore the Stephen and Harriet Myers Residence Historic Site at 194 Livingston Ave. in Albany. The Myers Residence has become a center for promoting many efforts to help the public understand the Underground Railroad and abolitionism and relate that history to important issues of justice and freedom today. Myers accomplished as much as he did because his wife Harriet maintained their home when her husband was working as a Steward on steam ships that plied the Hudson River, in which capacity he aided freedom-seekers or was on one of his many abolitionist speaking trips.

The Myers had five children. Stephen Myers died in 1870 and is buried in the Albany Rural Cemetery, Menands.

On Sunday, Oct. 23, 2021, an illustrated program will describe the current activities at the Stephen and Harriet Myers’ Florence Farming Settlement in Oneida County.

The public is encouraged to attend the Oct. 22 through 24, 2021, Induction event at the home of NAHOF in the Smithfield Community Center (5255 Pleasant Valley Road, Peterboro), which is 200 years old this year. The Gerrit Smith Estate National Historic Landmark will provide estate tours during the 2021 induction weekend. The Peterboro Mercantile is undertaking a make-over but can still take online orders for books, buttons, jewelry, magnets, stationery, tee shirts, and other articles related to abolition at mercantile.gerritsmith.org.

The National Abolition Hall of Fame and Museum will be closed for the 2020 season. For more information and updates, call 315.280.8828, email nahofm1835@gmail.com, or visit nationalabolitionhalloffameandmuseum.org.