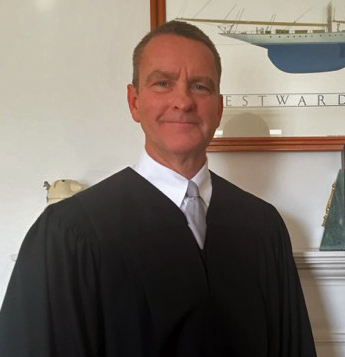 Prior to his election to county court, O’Sullivan served for 10 years at the local court level and has been an attorney for almost 30 years. That experience is crucial and excellent preparation to serve as a state Supreme Court Justice.

“State Supreme Court justices are called on to make important decisions in a wide range of cases involving the people who live and work in this region,” O’Sullivan said. “My service as a judge and attorney have given me the experience and ability needed to serve on this important court.

“Serving on the State Supreme Court would be the best way to use my experience and skill to serve our region and to ensure that justice is upheld for all.”

The new seat O’Sullivan is seeking was created recently by the state Legislature and the governor during the recently concluded legislative session. Since the new seat in the Sixth Judicial District was created, O’Sullivan said he has been encouraged by many friends, colleagues and party officials in the region to seek the position.

“I am encouraged and honored by those who have urged me to seek this position and who have cited their confidence in my ability, experience and record of service,” said O’Sullivan.

As Madison County judge, O’Sullivan presides over cases in Criminal, Family and Surrogate’s courts. His criminal court cases include a large volume of proceedings, including a number of major trials. He also decides Family Court cases involving child custody and support matters, and Surrogate’s Court matters pertaining to wills and estates. As County Court judge, he can also be called on for civil proceedings and interacts with city, town and village courts.

“The cases and issues presented in the Supreme Court are varied and often complex,” O’Sullivan said. “It is crucial that judges who serve at this level have the ability to render decisions fairly and efficiently. My service as county court judge has uniquely prepared me to be a practical and unbiased Supreme Court justice.”

Before his election as Madison County Court Judge, he served as Nelson town judge for 10 years and village of Cazenovia judge for six years. In Nelson and Cazenovia, O’Sullivan presided over criminal, civil and traffic issues; he also served as a county prosecutor early in his legal career.

O’Sullivan’s experience and qualifications also include more than two decades in private legal practice, representing clients on a wide variety of criminal and civil cases. As an attorney in private practice, he practiced law at every level of our court system, including federal, state, county, surrogate, family and town and village courts throughout upstate.

He and his wife of more than 30 years, Susan, have raised their family, including daughters Jacqueline and Hannah and son Jake, in Madison County.

“My family has many deep and meaningful connections to this area, and our dedication to our community and its people is the central reason I have decided to seek election to the state Supreme Court,” said O’Sullivan.