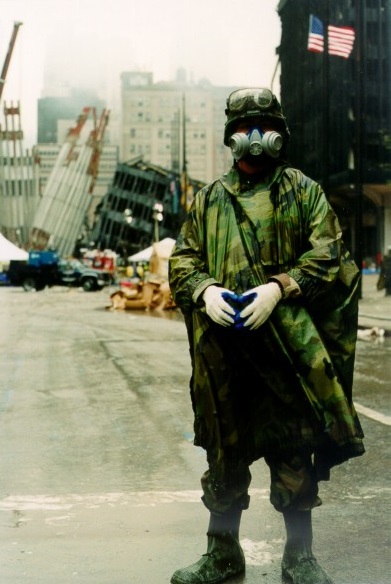 Twenty years ago, New York Air National Guard Technical Sgt. Jeremy Powell was the first member of the United States military to realize Sept. 11, 2001, was not going to be an ordinary fall day.

Powell was a full-time Air Guardsman assigned to the Northeast Air Defense Sector in Rome. The unit’s mission was to control the air defense of the northern United States east of the Mississippi.

At 8:37 a.m., Powell, who was then a senior radar technician, took a call from a Federal Aviation Administration controller in Boston informing him an airliner may have been hijacked and that the FAA needed a fighter jet to get a visual on the plane.

NEADs commanders called the 102nd Fighter Wing of the Massachusetts Air National Guard and directed them to get two F-15s airborne.

At 8:46 a.m., American Airlines Flight 11 crashed into the north tower of the World Trade Center.

By the end of Sept. 11, 2001, 4,265 members of the New York Army and Air National Guard were on state active duty to respond to the attacks. This was in addition to 2,000 active duty Guard soldiers and airmen who at work that day.

New York Army National Guard soldiers did not wait for the usual phone call alerting them to report to their unit for a state emergency mission. They saw what was happening on TV, put on their uniforms and reported to the armory.

“The New York Army National Guard was magnificent,” said retired Air National Guard Maj. Gen. Thomas Maguire, who was then serving as the Adjutant General. “The soldiers went to the sound of the guns.”

When the sun set on Sept. 11, 2001, there were 1,500 New York Army National Guard soldiers on duty in lower Manhattan, assisting the police and fire departments and another 1,500 – mostly from units of the 42nd Infantry Division – were on hand to assist on Sept. 12.

Majors Gregg Semmel and Tom Owens had been about to take off on a routine air-to-ground gunnery exercise at Fort Drum. They had only 20 millimeter cannon ammunition loaded and were not sure how they would shoot down a Boeing 757 if they had to.

In the immediate aftermath of the attack, highly trained para-rescue airmen from the 106th Rescue Wing on Long Island assisted in locating some survivors of the attack in the wreckage and in recovering the bodies of firefighters killed when the building collapsed.

Soldiers from New York City units provided support to the “bucket brigades” in clearing the initial debris in the search for survivors.

New York Army National Guard logisticians moved equipment and supplies and Stewart Air National Guard Base served as a hub for emergency supplies flowing in from across the country.

New York Army, and eventually Air National Guardsmen, began a day-to-day routine of assisting in securing the site, and then providing security on New York’s bridges and tunnels, train stations and subways.

New York residents said they felt safer having the military on their streets.

“Our city’s resources have been stretched to the limit,” said Nadine Koza, a Manhattan resident at the time. “We need you here to keep us safe.”

As the immediate response evolved into a security operation, armed soldiers manned checkpoints at bridges and tunnels to assist the NYPD and were also visible at Penn Station and Grand Central Station. Over time, that mission evolved into Joint Task Force Empire Shield, still on duty in New York City today.

“I feel much better that the National Guard is here,” said city resident Karen Lutzker in 2001, who only returned to the subway after Sept. 11 with the soldiers’ presence. “If I hadn’t seen the National Guard at Grand Central Station, I might not have taken the subway.”

Guard soldiers also assisted on Staten Island at the location where officials sifted through the wreckage of the World Trade Center looking for remains.

While this was going on, the Department of Defense mobilized National Guard forces as part of Operation Noble Eagle, a massive homeland security mission at airports and federal installations.

The 27th Infantry Brigade sent soldiers into 19 commercial airports and four separate nuclear power sites across the state to beef up security at the same time.

Five members of the New York National Guard were among the 2,763 people who perished in the collapse of the Twin Towers of the World Trade Center.

Thousands of the New York National Guard soldiers and airmen who responded to the Sept. 11 attacks later deployed to combat in Iraq and Afghanistan in the years following the attacks.

One of those was Sgt. Christian Engledrum, a member of the 1st Battalion, 69th Infantry. Along with other New York City firefighters, he was captured in a news photograph raising a battered flag over the World Trade Center site.

Engledrum and three other members of the 69th died Nov. 29, 2004, when an improvised explosive device struck their Humvee on patrol in Baghdad.

A total of 39 members of the New York Army and Air National Guard have died in those deployments since Sept. 11, 2001.

For more information about the New York National Guard and the attacks of Sept. 11, 2001, visit dmna.ny.gov/wtc/.