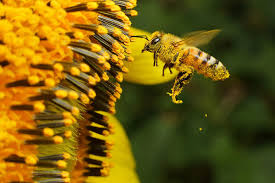 Editor’s note: Hannah Goff is a freshman at Colgate University. She enjoys hanging out with The New Yorker cartoons, Saturday Night Live, Chekhov plays, fellow sustainability representatives on campus, and honey bees. Last summer she founded the first pollinator garden at her high school. Goff generates poems featuring the superpowers of bees to inspire bee conservation efforts across all ages and, with that goal in mind, shared “The Bee’s Knees,” a poem illuminating the life of bees and various social issues. It is published here in bulleted paragraphs to keep the verses together.