More than 250 people participate in march 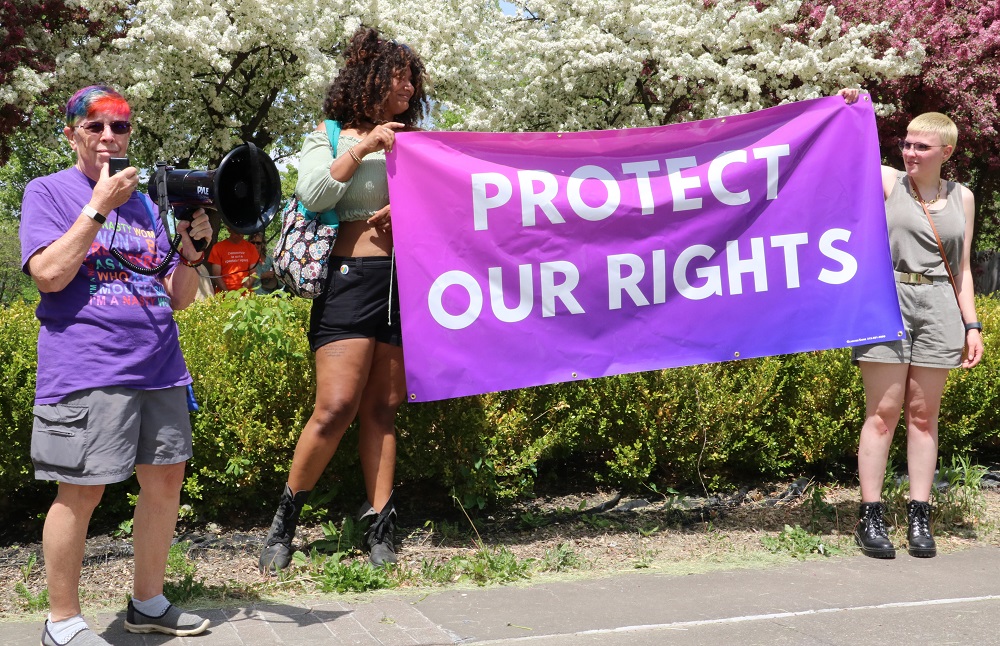 On Saturday, May 14, 2022, more than 250 people joined thousands across the country and marched in support of abortion rights and a woman’s right to choose and maintain autonomy over her own body. Organized by Indivisible Mohawk Valley and cosponsored by Planned Parenthood, the Unitarian Universalist Church of Utica and Temple Emanu-El, the protests were in response to a leaked draft decision by U.S. Supreme Court Justice Alito, which would overturn Roe v. Wade — a devastating decision that will open the floodgates on abortion bans in states across the country.

Chanting “Abortion rights now,” amid signs and clothing decorated with pins and messages in support of a woman’s right to choose, the diverse crowd hailed from Utica, Rome and surrounding areas.  The marchers spanned every demographic, from children in strollers to seniors with canes. Many of the younger marchers and organizers have never lived when access to abortion wasn’t available.

“I was not around in the early 70s, when abortions were not accessible to women, so I was not a witness to all of the hardship that came before Roe V. Wade,” said Monica Lewis, local artist and activist, “however, I am here now, and I will not be a bystander and watch us return to those times. We will continue our support and efforts to protect women now and most importantly in the future.”

There were many others who remembered what life was like prior to 1973 when Roe v. Wade became the law of the land.  Judy Jerome, retired librarian, is one.

“I remember those days when women were forced to maintain pregnancies against their will,” Jerome said, “and I even had a friend whose life was threatened by an unsafe backroom abortion. Her life was saved by the emergency physicians at Crouse Hospital in Syracuse.”

Local pediatrician, Emmie Pizarro Davis questioned the motives of those who oppose Roe.

“I find it bewildering that those who are always crying ‘freedom’ are trying to restrict a woman’s freedom of choice and reproductive autonomy, and those who espouse religious freedom are trying to impose their religious beliefs on others,” Davis said.

“My beliefs are just that….my beliefs,” said former Herkimer County legislator Helen Tucker Rose. “I have no right to inflict them on you. There can be no negotiating bans or restrictions on my reproductive choices. To do so is an assault on basic human rights.”

Indivisible Mohawk Valley is a group of concerned citizens who self-organize around events and projects that strengthen our bonds and community with one another while standing up peacefully and non-violently to the destructive, corrupt and undemocratic forces in American politics.