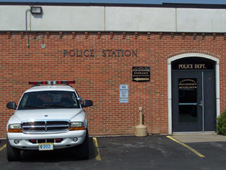 The Canastota Police Department and Canastota Fire Department responded to the scene of a personal injury hit-and-run incident in Canastota Saturday evening, May 28, 2022.

At 8:42 p.m., a black pickup truck was southbound in the 100 block of South Peterboro Street when it struck a pedestrian who was beside her parked car. The truck then drove off, leaving the injured pedestrian behind.

The victim, a Utica woman in her mid-40s, suffered head trauma and other major injuries. She was taken by Greater Lenox Ambulance Service to SUNY Upstate Medical University Hospital in Syracuse, where she was initially listed in critical condition; at this time, there is no official update on her condition.

Canastota police have located the truck that was involved in the incident. The driver is under investigation, and charges may be filed pending the results of that investigation.

The names of the victim and suspect will not be released until the investigation is complete.

State Route 13 (Peterboro Street) was temporarily closed while emergency personnel tended to the victim and police investigated the incident. Oneida Nation police and state police assisted at the scene.

Anyone with information is asked to call the Canastota Police Department at 315.697.2240. Calls can be kept confidential.