‘Arks’ once sailed the Chenango River 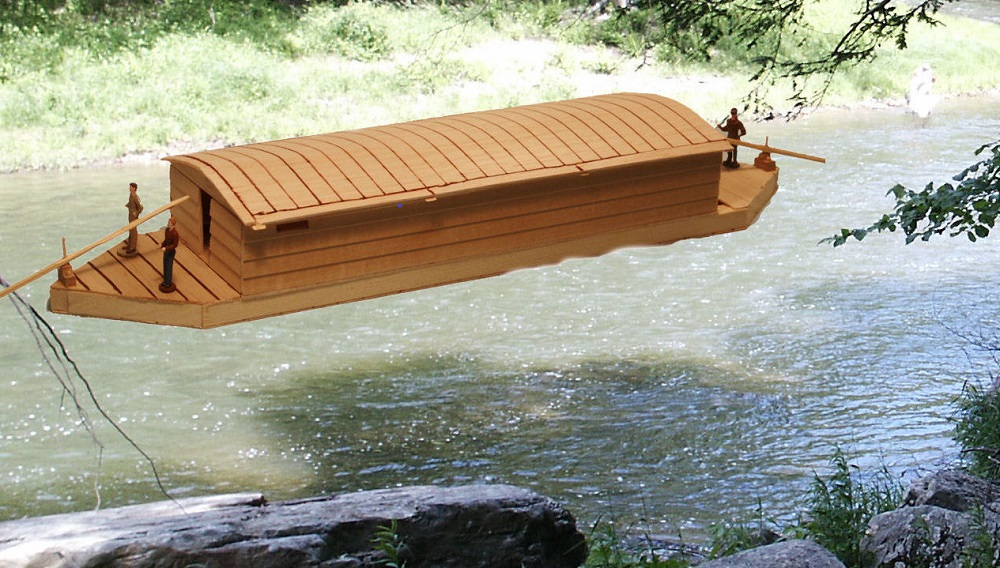 Artist’s conception of an early ‘ark’ used to transport goods by water.

Decades before the Chenango Canal, large boats called “arks” transported lumber, shingles and other commodities out of Sherburne to distant points such as Baltimore, several hundred miles away.

Daniel P. Fitch, a veteran raftsman, wrote of this subject many years later. He said the first ark on the river was built and launched in 1803, a short distance above the village of Sherburne.

It was built for the purpose of conveying lumber down the river, with the expectation of finding a market in Baltimore. Nathaniel Austin and his brother were engaged in the enterprise.

“The anxiety of the people to make the river available for purposes of navigation, was such, that they voted a tax upon the town, to clear it of obstructions,” Fitch wrote. “The launching of the ark was a gala day. Men, women and children turned out to witness the performance. When the famous ark was afloat, they must have a ride.

“Like the Ark of old, it was soon filled with living creatures, even a dog. With towing, setting and pulling by the willows, they were enabled to ascend the river towards half a mile.

“Like boys after tugging and hauling their sleds to the top of the hill, they were well paid for their toil, by riding down again. It was freighted chiefly with pine staves and shingles, which did not prove as remunerative as they anticipated; and they found more difficulty in keeping the channel of the river than they expected, especially when it was on the rise.” (1)

Arks consisted of a frame of three squared timbers, each 8 by 12 inches, the two on the outside being 55 feet long and the center piece, 75 to 90 feet long. These were laid parallel and evenly spaced so that an overall width of 16 feet was attained. They were joined together by shorter pieces and on the bow and stern. Similar timbers joined the outside frames with the center, thus making bow and stern sheer to make better sailing. The frame was then planked completely, caulked as tightly as possible, turned over and placed in the water with the planked side down. Studding four or five feet long was then mortised into the outside timbers and planked on the outside to the ends. The ark, except at the bow and stern and a small place midships for the cabin, was covered with boards which protected the cargo and provided a smooth walk for the crew while operating and steering the craft. They were a cousin of the more common Durham boats.

A solid oak post was placed at each end in which was imbedded a stout oak pin upon which hung the oars used to steer the craft. The oars were made from straight, light dry pine pieces, 30 feet long, with a groove in the end into which was inserted a blade made from a plank 15 feet long and 18 to 20 inches wide. The oars were balanced upon the oar pin in such a manner that they could be easily handled. The blade dipped slightly into the water.

There were one or two other arks built at Sherburne, for similar purposes, near the south line of the town, one of which was loaded with grain, which were damaged during the voyage, becoming a total loss. These vessels only made one-way trips and were dismantled at their destination and the lumber sold. The crews walked home. Austin and his son Seymour, while on this expedition, were both attacked with the yellow fever. The father died but they recovered.

Nathaniel Austin was born Sept. 15, 1764, in Sheffield, Berkshire County, Mass., and died May 6, 1803, at Chenango Forks where he was buried. He and his wife, Humilis (Owen), raised 10 children. He originally settled in Sherburne in 1793, having purchased 150 acres there. He and his brother, Stephen, were partners for many years; they raised sheep. They purchased 150 acres of land in what is now Sherburne in 1792. Stephen and Nathaniel were also both original members of the Sherburne Federal Library in 1800.

Nathaniel’s ark enterprise started with a petition, sent to the legislature, which sought to tax the various towns along the Chenango River so that the waterway could be cleared, allowing lumber shipments access to ports to the south such as Baltimore, Md. Early water transportation was very common on the larger streams in upstate New York in pioneer times, including the Delaware, Tioughnioga, Chemung and Canasteo rivers. The arks and rafts converged on the Susquehanna River at what is now Athens, Pa. The Chenango River connects with the Tioughnioga at Chenango Forks. Binghamton, once called Chenango Point, was where watercraft rendezvoused for their trips south.

An interesting story is told of Nathaniel that occurred prior to his coming to Sherburne. He was involved in the Shay’s Rebellion insurrection over debt collection in Massachusetts in 1786 to 1787, was arrested and sentenced to be hanged. While confined in prison at Springfield, Mass., his wife came the night before he was to have been executed, to make a farewell visit. She exchanged her cloak and hood with him, and in the evening twilight called to the keeper to be released. Her husband walked out unsuspected and made his escape. She remained quiet until he escaped and was beyond danger of being recaptured. The jailor, finding he had no legal authority to detain her, allowed her to depart.

Regarding Sherburne itself, it may been named for the Rev. James S. Sherburne, who came to this area from Connecticut about 1790 and was a celebrated preacher. He died Feb. 29, 1821, aged 80 years, 3 months and 17 days, and is buried in East Hill Cemetery in Sherburne.

(2) Reminiscences, Anecdotes and Statistics of the Early Settlers and the ‘Olden Time’ in the Town of Sherburne, Chenango County, N.Y. by Joel Hatch Jr., Utica, 1862.

(4) The Descendants of Richard Austin of Charlestown, Massachusetts by Liz Austin Carlin, 1995.