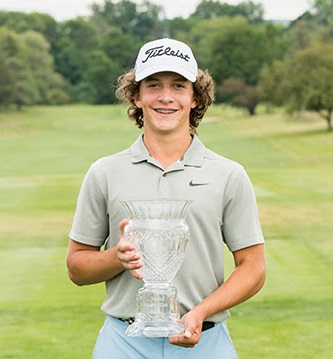 In the 65th NYS Boys’ 14U Junior Championship, Jacob Olearczyk of Barneveld successfully defended his title and won by three strokes. After the first round, he was three strokes behind first-round leader Dan Young of Bellevue Country Club, who fired 4 under 67 Tuesday, July 26.

“It’s a different mindset when you’re coming from behind instead of the same at the start,” Olearczyk said of the difference between last year and this year. “Going into today, I obviously knew the course pretty well. I knew where I could make some moves to gain some shots being three shots back.”

Olearczyk posted another good number (73) in the second round, while Young posted an 80 to fall into third place.

“Dan and I are pretty close,” he said. “We play in a lot of tournaments together. I knew Dan was going to hold his own, and he did for the most part.”

Michael Clifford-Levy of East Hampton Golf Club was the runner-up at 3-over 145.

“I’ve been there before, knowing that I’m going home with the trophy hasn’t fully set in yet, but on the car ride home it definitely will.”