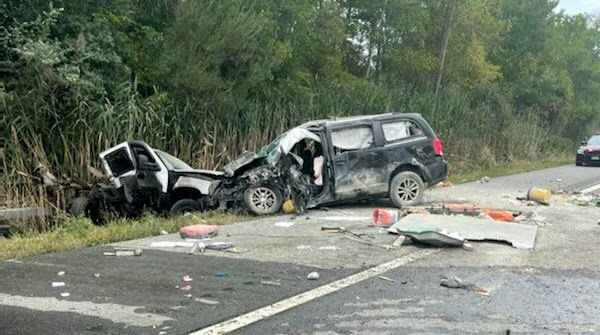 State police in Lysander are investigating a three-vehicle crash that occurred on State Route 690 southbound in the town of Van Buren, Onondaga County.

Wills was transported to SUNY Upstate Medical University Hospital with internal injuries; she was listed in stable condition.

The operator of the Caravan, Russell A. Baker, 43, of Baldwinsville, and a 15-year-old passenger were transported to SUNY Upstate Medical University Hospital with non-life threatening injuries.

A 2019 Nissan Rogue operated by Dorinda D. Justiniano, 61, of Baldwinsville, was following the Caravan and was unable to avoid striking the rear of the Caravan. She was not injured in the crash.

Charges against Wills are pending for DWAI-drugs once she is released from the hospital. A state police drug recognition expert determined she was under the influence of drugs just before the crash.

State police were assisted at the scene by the Onondaga County Sheriff’s Office.

If anyone has any information or recognizes anyone in the photos above, they are asked to contact State Police at (315) 366-6000.

ORIGINAL: On Aug. 27, 2022, at 4:37 p.m., troopers responded to State Route 28 in the area of Bear Creek Road in the town of Forestport for a reported road rage incident.

When troopers arrived, they discovered the male driver of a Chevrolet Impala suffering from a gunshot wound following a road rage incident with several motorcyclists. The victim was transported by ambulance to St. Elizabeth Hospital with a non-life threatening injury.

Investigators ask anyone who may have witnessed this incident, stopped at the scene or has further information to contact the New York State Police Bureau of Criminal Investigation at 315.366.6000.

On Sept. 13, 2022, troopers arrested Errol Oskay, 36, of Sackets Harbor, on one count of first-degree falsifying business records, a class E felony; and one count of petit larceny, a class A misdemeanor.

Oskay is charged with purchasing a child’s riding toy at Walmart Sept. 12 in Watertown and returning the item the next day. Walmart asset protection notified police after they discovered the box contained an older, much-weathered model of the riding toy inside.

Oskay, an off-duty state trooper, has been suspended while an internal investigation is conducted. He was issued an appearance ticket and is scheduled to appear in Watertown Town Court Oct. 3, 2022.

The operation targeted the sales of flavored nicotine vapes to minors.

As a result of receiving countless complaints from school districts and parents, several law enforcement agencies worked together to attempt to curb such sales. The investigation and arrests encompassed the last several weeks.

This is a reminder to all smoke shops in New York State that the legal age to purchase tobacco products or nicotine vapes is 21 years of age.

As a result of the initiative, the following locations were checked and found to be in compliance:

The following individuals face charges of endangering the welfare of a child (PL260.10) after their respective locations were found not to be in compliance with the laws dealing with the sale of nicotine vapes to persons under the age of 21:

On Sept. 10, 2022, at approximately 11 a.m., troopers stopped a vehicle at the toll entrance to I-90 in Utica for a vehicle-and-traffic violation. The driver, Brenda M. Evans, 56, of Utica, was found to be intoxicated; she was taken into custody, transported and processed at SP Schuyler, where her blood alcohol content was determined to be 0.25 of 1 percent.

Evans was charged with aggravated driving while intoxicated, an unclassified misdemeanor, and was released to a sober third party with appearance tickets returnable Oct. 18, 2022, in Utica City Court.