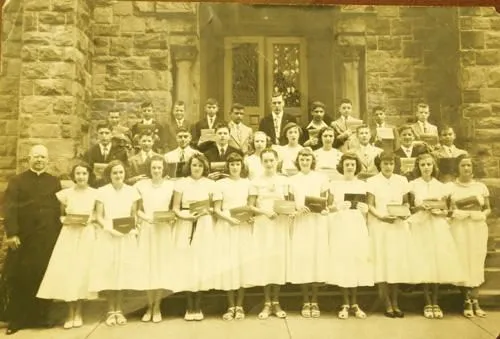 The Guardians of St. Patrick’s Elementary School Foundation, Inc., hosted its 100th anniversary gala at The Kallet Civic Center Nov. 5, 2022. St. Patrick’s School is celebrating 100 years of Catholic Christian education for the young people of the community, committed to faith development, academic excellence and service to others. The longevity of the school is a testament to the dedication of benefactors, volunteers, families, teachers, staff, administrators and parishioners for more than a century.

The preparations for the school began many years before building started. The Rev. John H. McGraw came to St. Patrick’s Church in October 1913 with a goal to build a parochial school. In 1919, McGraw announced the property behind the church had been purchased for the school. The foundation was completed during the summer of 1920 by contractors Fazio and Avery. Bishop John Grimes laid the corner stone Sept. 19, 1920. The Rev. Charles McEvoy, superintendent of schools in the Syracuse Diocese, gave the sermon.

More than 3,000 people attended the event.

The school opened to students Sept. 7, 1921. The six faculty members were nuns from the Immaculate Heart of Mary Order from Scranton, Pa. Each grade level, from first through sixth, had a single class; 211 students were enrolled on the first day, but the number grew to 280 by the second week.

The first commencement exercise was held June 30, 1922, for sixth-grade students. In the fall of 1922, soldiers and sailors of Oneida who served during World War I donated a flag and flagpole to the school. They were dedicated in a ceremony Oct. 15, 1922, as the students formed a living flag on the lawn.

In 2015, St. Patrick’s earned the Middle States Accreditation. An institution is accredited only when the educational community has verified that its goals are achieved through self-regulation and peer review. St. Patrick’s continues to be a faith-centered community, focused on promoting academic excellence while developing a strong moral conscience in our students. The school serves families from Canastota, Morrisville-Eaton, Cazenovia, Chittenango, VVS, Madison, Camden, Stockbridge, Waterville, Jamesville and Oneida.

The school has undergone additional structural and technological upgrades in recent years. St. Patrick’s was one of the only schools in Central New York to remain open during the COVID pandemic and continues to grow and thrive. With the enthusiastic support of Fr. Chris Ballard and Fr. Nathan Brooks, enrollment is 120 and includes students of all faiths. Tuition assistance is available based on family need.

The Guardians of St. Patrick’s Elementary School Foundation, Inc., is a 501(c)3 organization formed in response to an increasing need for financial support for current and future students. The goal is to continue providing tuition subsidies, supplies, major repairs and other needs of St. Patrick’s Elementary School through financial contributions by benefactors, community members, families of alumni and the alumni themselves.