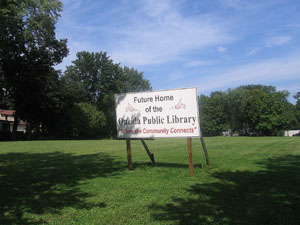 (Oneida, NY – Jan. 7, 2015) The Central New York Community Foundation recently announced the awarding of a grant for $100,000 for the construction of the Oneida Public Library’s new library facility on Main and Elizabeth streets.

The OPL’s proposed new library will be a one-storey brick and stone structure with some 18,000 square feet of usable space, including a 125-seat community room. Boasting a modern technical infrastructure and potential LEED certification for energy efficiency and environmentally friendly design, the new library is intended to provide books, media, electronic communication capacity, literacy services and ample meeting space to the greater Oneida community in the 21st century.

“We are thrilled,” said OPL Board President Patricia Albaugh, “that the Community Foundation has joined the hundreds of other businesses, foundations and residents of the greater Oneida area who have contributed to the Capital Campaign. The new OPL will be an institution that all area residents will enjoy, with cheerful, wide open space for learning, creating, exhibiting, meeting, and plenty of parking to make visiting a breeze.”

Established in 1927, the Community Foundation is a public charitable foundation that “encourages public philanthropy by supporting the growth of permanent charitable endowments,” according to the Foundation. As of March 2014, the foundation had a reported $172 million in assets. It awarded almost $9.5 million in grants in 2013 to more than 900 not-for-profit organizations in Central New York.

“The Community Foundation considers our new library to be a ‘transformative project’ that will revitalize the greater Oneida area and help stimulate economic growth,” said Carolyn Gerakopoulos, Oneida Library director. “I think of the new library as a statement of community faith, as an investment in the future, in life-long learning and growing opportunities for the younger generation so that they will want to stay here and contribute to the well-being of the entire community.”

For more information about the OPL’s New Library Project, stop by the library, 220 Broad St., or call 363-3050 and ask for Carolyn Gerakopoulos.