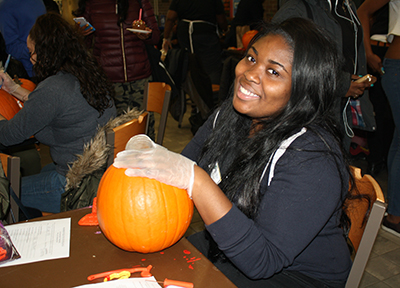 “Each year we will celebrate community service achievements on October 26, Founders’ Day, which coincides with the first day of classes at Morrisville in 1910,” Rogers said.

Faculty, staff and students and the community joined in the celebration, Oct. 26, which included a reception and tree-lighting in the academic quad. The hundreds of tree lights represent countless community service endeavors.

Engaging in community service isn’t anything new at Morrisville State College. A member of the New York Campus Compact for Community Service, MSC has an established record of civic engagement, ranging from coat drives and organizing Easter egg hunts for local children, to helping in the care, treatment and rehabilitation of animals.

Efforts are visible year-round, everywhere on campus with Student Government Organization-supported clubs, honors and academic programs, athletes and many others engaging in community service activities.

To help organize, promote, and facilitate community service activities, the Student Activities Office formed the Mustang Outreach and Volunteer Efforts (MOVE) group.  This year, MOVE organized a successful Relay for Life, which involved participation from more than 200 students and faculty and raised $6,000.

Additionally, service-learning courses provided a venue for civic engagement and offered services ranging from auto repair and plant sales to tree inventories and planting projects at MSC. The college community also stepped forward to assist with disaster relief when a tornado struck the nearby community of Peterboro, and has also reached out to civic groups in both Morrisville and Norwich.

Student athletes have also made a significant impact through service work. For the fifth straight year, MSC athletics has reached beyond the previous year’s efforts to serve the community, taking part in 39 different activities, and logging more than 1,700 hours of community service, raising more than $9,000.

Leading up to the Founders’ Day tree-lighting was an afternoon of activities which included pumpkin-carving and making caramel and chocolate apples.

The “giving” theme of the day spread to activities too. Students created dog toys which they donated to Wanderer’s Rest Humane Association in Canastota and filled bags with candy for the annual Parade of Costumes for local children.

Giving to the community goes hand in hand at MSC, and over the years, that spirit has been recognized on a larger scale.

“President Obama recognized the college, placing us on his honor roll for community service this past year,” Rogers said. “This honor is a direct outgrowth of the extensive outreach by our students, faculty and staff to our broader community.” The college has been named to the President’s Higher Education Community Service Honor Roll in 2011, 2012, and 2014.

The Founders’ Day event was topped off with servings of the Presidential Inaugural “Rogers’ Ripple Ice Cream” (made at the college) with “Founders’ Fudge Sauce.”

The event is the first in a series leading up to the inauguration of Rogers as the eighth president of Morrisville State College.  The formal installation ceremony will be held on Nov. 20 in the college’s recreation center.

During the Founders’ Day reception, members of the Morrisville community were recognized as Lions of Distinction by the Lion’s Club, for their distinguished service. Honored were: Walt Malloy, Roger Wilcox, Tony Zazzara, Frank Szewczyk, and Willis Hannah.