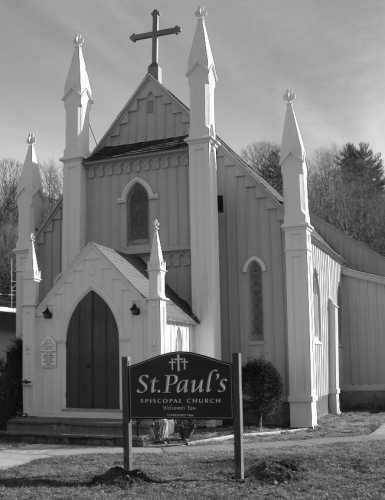 The earliest record of Episcopal Church services in this vicinity was 1816 when St. Stephen’s Church of Perryville was incorporated. At that time, Chittenango was little more than a gathering of frame and log houses. From 1816 to 1832 rectors from St. Stephen’s held missionary services in Chittenango.

The plans for the church were designed after the plan of St. Peter’s Church at Cazenovia. The building was completed in less than six months. The first service was held in the church Easter Day, April 1, 1866. On May 12, 1866, the church was consecrated by Bishop Coxe.

St. Paul’s Episcopal Church will be one of dozens of religious institutions throughout New York state participating in the Scared Sites Open House weekend May 21 and 22. For more information on the Sacred Sites Open House Weekend, contact the New York Landmarks Conservancy at 212-995-5260 or sacredsites@nylandmarks.org.