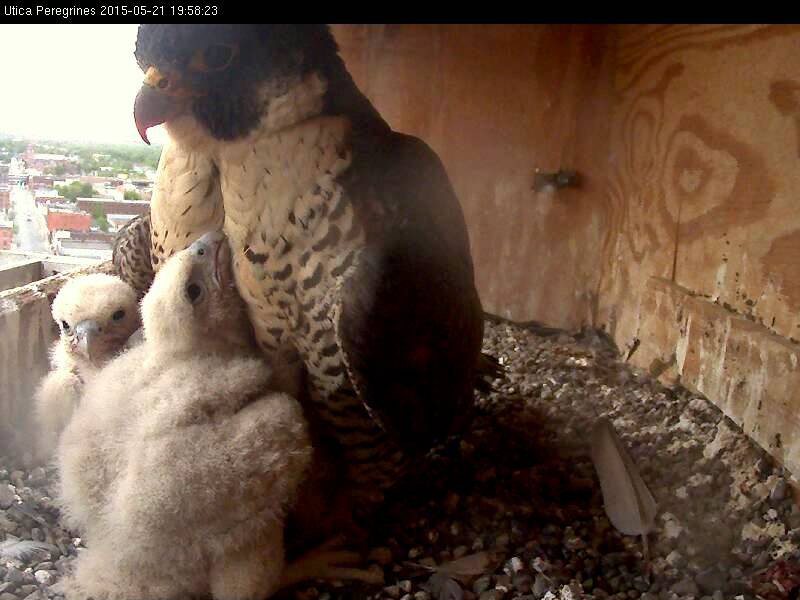 The Utica Peregrine Falcon Project is asking for public participation in naming this season’s two Peregrine Falcon chicks.  Individuals are asked to submit no more than two names of either gender. It is believed that one nestling is male and one is female, but it’s too early to tell for certain. All names submitted will receive careful consideration and selected finalists will be voted on by a UPFP naming committee.
Participants whose names are chosen will be eligible for a prize to be awarded during the start of Fledgling Watch in early June. The Watch, which is organized to ensure the safety of each young falcon’s early flights, will take place in the vicinity of the Adirondack Bank Building in Downtown Utica.
This naming contest is free and open up the public.
Participants are asked to refrain from submitting the names of celebrities (including actors, musicians, athletes and politicians). Additionally, participants must include the reasons why they selected their names. All submissions must be sent via email to:
falconwatch185@gmail.com
The deadline for  submissions is Monday, May 23. Selected names and contest winners will be announced on the UPFP website (uticaperegrinefalcons.com) and the Falcon Watch Utica Facebook page.

One thought on “Naming Contest for Utica’s Peregrine Falcon Chicks”