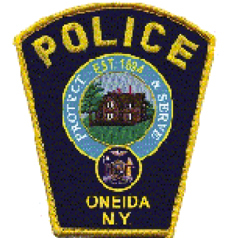 Michelle M. Lamb, 23, Main St., Oneida, was issued an appearance ticket May 27 on charges of two counts of animal abuse and unlicensed dog. Lamb is alleged to have left a cat and dog in an apartment unattended with no food or water.

Amanda E. Coonrod, 32, Pleasant Ave., Oneida, was issued a criminal summons May 27 on a charge of second-degree harassment. She is alleged to have spit in another person’s face.

John E. Jones, Jr., 69, Prospect St., Oneida, was charged May 27 with reckless driving and failure to yield to a pedestrian in a crosswalk. Jones is alleged to have driven in a reckless manner as people were crossing in a crosswalk and to have brushed one with his sideview mirror.

David P. Schuer, 52, N. Main St., Oneida, was issued an appearance ticket May 27 on a charge of possession of open container of alcohol in public.

Brandon M. Crouth, 29, E. Walnut St., Oneida, was issued an appearance ticket May 27 on a charge of open burning. Crouth is alleged to have been burning a couch, papers and other waste at 11:20 p.m. in a residential neighborhood.

William J. Bush, 33, Seneca Turnpike, Canastota, was arrested May 28 on charges of second-degree burglary, a class C felony, and third-degree criminal tampering. He is alleged to have at 1:52 a.m. unlawfully forced entry into another person’s North Main Street apartment and removed a plexiglass window and forced open a door in the process. He was arraigned and committed to Madison County Jail in lieu of bail set at $10,000 cash or $20,000 bond. Bush had left the area on a bike and was located near Hubbard Place by patrol, where he attempted to run and was apprehended.