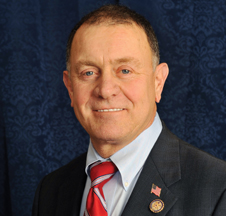 Rep. Hanna has an Academy Committee that reviews each candidate’s application and then hosts interviews. The Academy Committee is made up of 15 community leaders, veterans and educators from throughout the 22nd Congressional District. Interviews were hosted in Binghamton and Utica in November. The Committee acts independently and fairly to review and evaluate each student who applies.

“I congratulate these students and wish them the best as they begin the process to be formally accepted to our Service Academies,” Rep. Hanna said. “It is a privilege to have so many talented students in the 22nd Congressional District, and it is an honor to recommend them for entry to the Service Academies. I wish them much continued success.”

Parents:
Mr. and Mrs. Matthew and Julie Neuman of Homer

Parents:
Mr. and Mrs. Paul and Kyung Lee of Vestal

Parents:
Mr. and Mrs. Charles and Deborah Pratt, of Sauquoit