Comedy Improv to Take the Stage at Cazenovia Forum Fundraiser 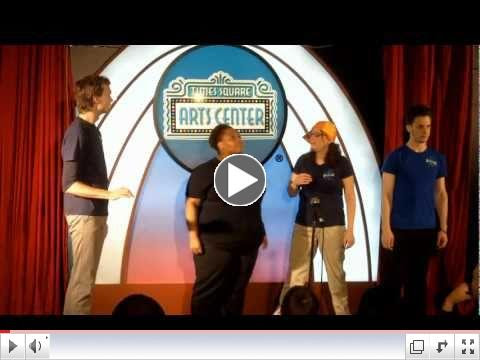 A comedy improv performance in the style of the popular television show Whose Line is it Anyway? will be the centerpiece of the biennial fundraising gala for the Cazenovia Forum lecture series, to be held Saturday, November 11, at 7:30pmat the Hampton Inn in Cazenovia.
The entertainment for the evening will be provided by the long-running improv troupe “Eight is NEVER Enough,” which consists of New York City performers and artists who are dedicated to captivating audiences through old school comedy entertainment.
Performing regularly at the Broadway Comedy Club near Times Square, “Eight…” is one of the few NYC-based improv companies focusing on “short-form” improvisation, which relies heavily on the audience to provide ideas (and sometimes acting talent) for every scene, skit and song.
In addition to an evening of raucous musical comedy performance and audience participation, event-goers will be treated to delicious pub fare and locally produced spirits.
Seating is limited and tickets are available at $150 and $75, with a special rate of $50 for anyone age 40 or under, with proceeds going to support the Forum’s activities in bringing national and internationally known speakers to Cazenovia to present viewpoints on current events and issues.
The Cazenovia Forum is grateful to Empire Brewing Company, Fastrac, Wegmans, the Hampton Inn & Suites and the Lincklaen House for their generous sponsorship of this event.
Ticket information has been sent by postal mail to Cazenovia Forum supporters.  If you have not received an invitation and would like to attend, send an email to Diane Clark at drdkclark@gmail.com.