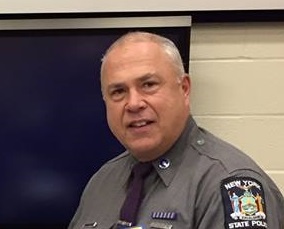 On Jan. 2, 2018, Trooper Anson passed away from an illness stemming from his assignment at the World Trade Center site following the terrorist attack Sept. 11, 2001.

Following the events of 9/11, Trooper Anson was assigned to New York City to aid in the search and recovery efforts.

Trooper Anson served his entire career in Troop G. He was most recently stationed at SP New Scotland. Trooper Anson was previously assigned to SP East Greenbush, SP Brunswick and SP Schodack, where he served as a School Resource Officer from 2003-2010 in the Averill Park and Brunswick School Districts. In addition, Trooper Anson served as an Academy Training Officer at the Basic School for multiple classes from 2012-2017.

Trooper Anson is from Albany County and is survived by his wife, their three children, and his brothers.

Any updates, including funeral arrangements, will be posted on the New York State Police Online Newsroom.