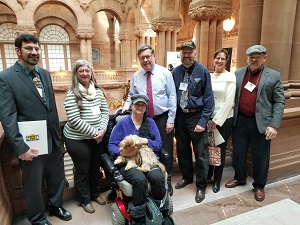 Chenango County Farm Bureau officers and members, along with at least 80 other additional county Farm Bureaus and ag organizations, offered the best in New York grown- and produced food and beverages at the “Taste of New York” reception held in the Albany Concourse.

Chobani, representing Chenango County, distributed some of their products. It was an opportunity to showcase the diversity of agriculture in our state while also making personal connections with lawmakers, agency staff and media and was a precursor to NYFB’s annual lobby day, where more than 200 farmers met with their senators, members of assembly and adopted lawmakers from New York City.

CCFB President Bradd Vickers noted the importance of meeting with downstate legislators to help them realize how legislation affects those that produce their food. CCFB Vice President and Sherburne dairy farmer Keith Vanalthuis stressed how many of the regulations increase the cost of doing business andn may force producers to sell out and leave New York.

CCFB Director Karen Kutik, a honey producer, emphasized the difficulty regulations and permitting have on anyone trying to do new construction. CCFB Director Joe Cornell expressed concerns about startup cost and permitting, which discourages young people from doing business in New York state.

Vickers in a phone conference with American Farm Bureau President Zippy Duvall stressed the need for assistance and support for the dairy farmers in the northeast. Vickers went on to say the loss of any farm is a matter of national security.