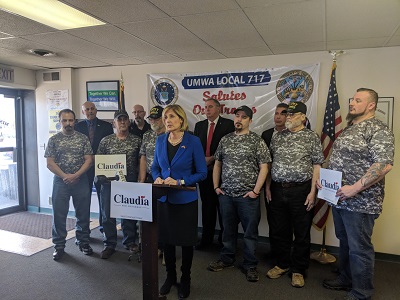 Congresswoman Claudia Tenney accepted the endorsement of the United Mine Workers of America Local 717, the union that represents Remington Arms employees.

“I am honored to accept the endorsement of UMWA Local 717,” Tenney said. “Failed economic policies and gun-grabbing measures have been tough on this iconic company; however, it has been my privilege to work closely with the hardworking employees at Remington and advocate for their needs both in Albany and in Washington.

“I’m also fighting to protect the UMWA pension and put it back on a path to solvency. I’ve cosponsored the American Miners Pension Act to ensure that the nearly 87,000 UMWA retirees on the plan continue to receive their hard earned pensions.”

Statement from UMWA 717:
UMWA 717 is proud to endorse Representative Claudia Tenney for re-election to Congress in the 22nd District of New York. Congresswoman Tenney is a leading voice on the Second Amendment and a fierce advocate for members of our union who works to keep jobs at our plant in Ilion.  Representative Tenney fought tirelessly against the inception of the SAFE Act and she continues to stand up for our union members and our community in Congress.