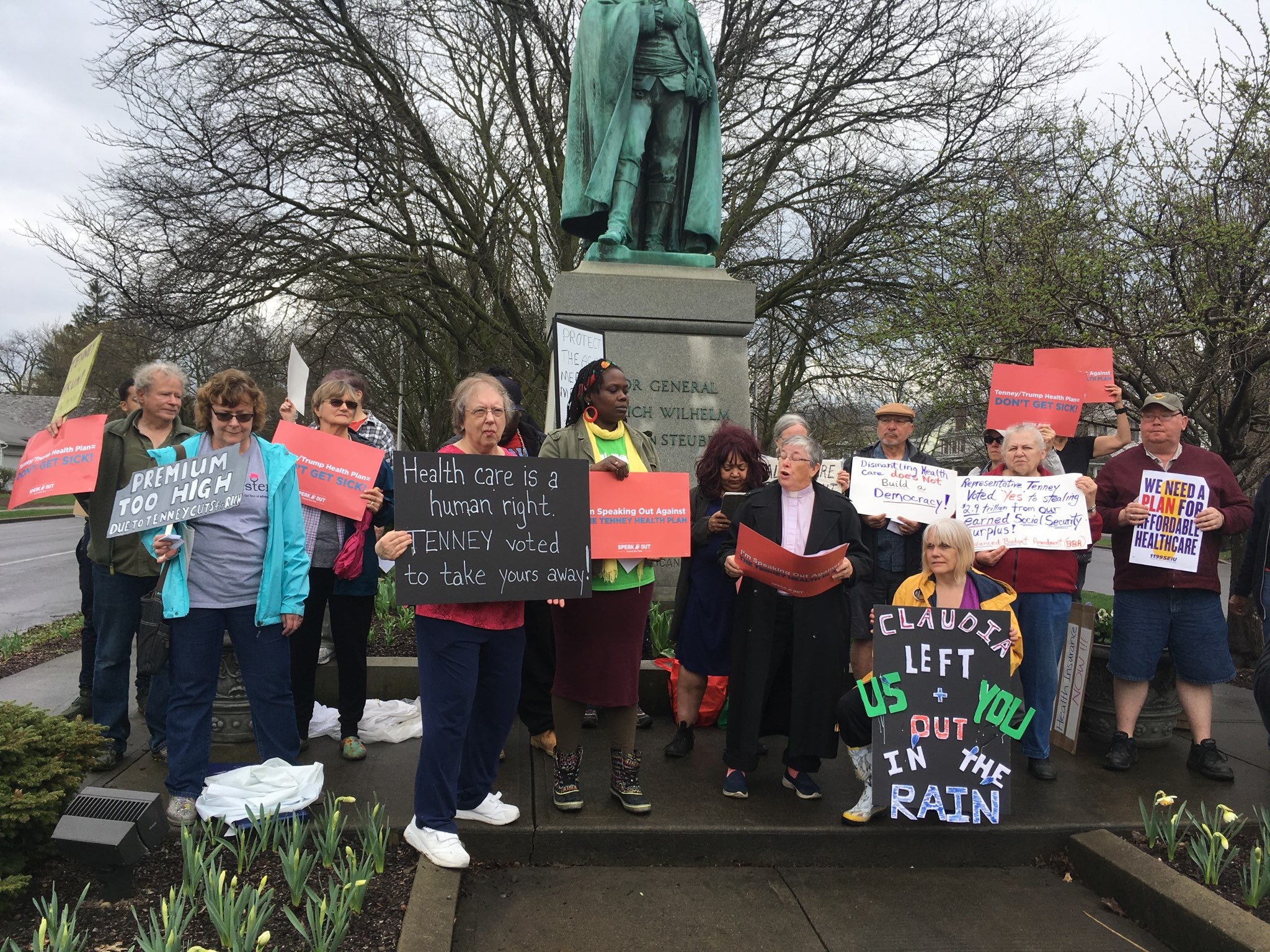 One year later, activists remind voters that Tenney tried to take healthcare away from 37,800 of her own constituents; Tenney’s Healthcare Plan: Don’t get sick

Submitted by Will Speak Out Central New York and its allies lined Memorial Parkway with tombstones today and local residents spoke out about how the Affordable Care Act saved their lives and prevented their financial ruin, all to mark the one-year anniversary of Congresswoman Claudia Tenney’s vote to repeal the ACA and strip healthcare from over 23 million Americans.

“We haven’t forgotten about Congresswoman Tenney’s vote in the failed Republican attempt to repeal the Affordable Care Act, because it would’ve had real impacts for our families and communities: 37,800 of her own constituents would have lost healthcare, and another 290,000 would face premium hikes or threats to their coverage because of their pre-existing conditions,” said Dawn Laguerre of Central New York Citizen Action. “We’ll continue to remind Central New Yorkers just how devastating Tenney’s vote would have been for her own constituents, because we deserve a member of Congress who puts the needs of their district ahead of vindictive partisanship.”

Local residents spoke from a mock graveyard about how critical the Affordable Care Act is for their health and financial wellness, standing among tombstones representing the thousands of Central New Yorkers – and millions of Americans – who would have lost insurance if the ACA was repealed.

Tenney supported the attempted repeal last May, even though 37,800 of her own constituents would have lost their healthcare (among 1.2 million New Yorkers overall). The Republican repeal would have also jeopardized almost 3,000 healthcare jobs in the district through billions in cuts to health programs. Tenney’s vote would have forced thousands of Central New Yorkers off their insurance, and into a position where illness could mean death or financial ruin.

“I was born with a heart condition that left me unable to work. If it wasn’t for Medicaid, I wouldn’t be able to afford the treatments that I need to survive,” said Annamarie Smith, a Utica resident who relies on the Medicaid expansion included in the Affordable Care Act for coverage. “Claudia Tenney receives free government health care, but wants to take away my health care coverage? That’s messed up. Congress needs a priority check.”

Earlier this week, Donald Trump’s own former Health & Human Services Secretary Tom Price admitted that repealing the ACA’s individual mandate – which Tenney happily supported when she voted to pass the TrumpTax in December – will drive up insurance costs for everyone. The same day, a report from The Commonwealth Fund showed that 4 million people have lost health insurance since 2016, as a direct result of ongoing Republican efforts to sabotage healthcare.

Once speakers finished sharing their stories, residents took to the streets to hand out “Claudia Care” hand sanitizer – reminding Utica voters that the only healthcare plan Tenney wants them to have is simple: don’t get sick.

About Speak Out Central New York

Speak Out CNY is dedicated to educating and empowering Central New Yorkers through grassroots organizing, digital advocacy, and community partnerships. By advocating for policies that help working families make ends meet, we aim to encourage our members of Congress to protect our health care and work to expand economic opportunity.