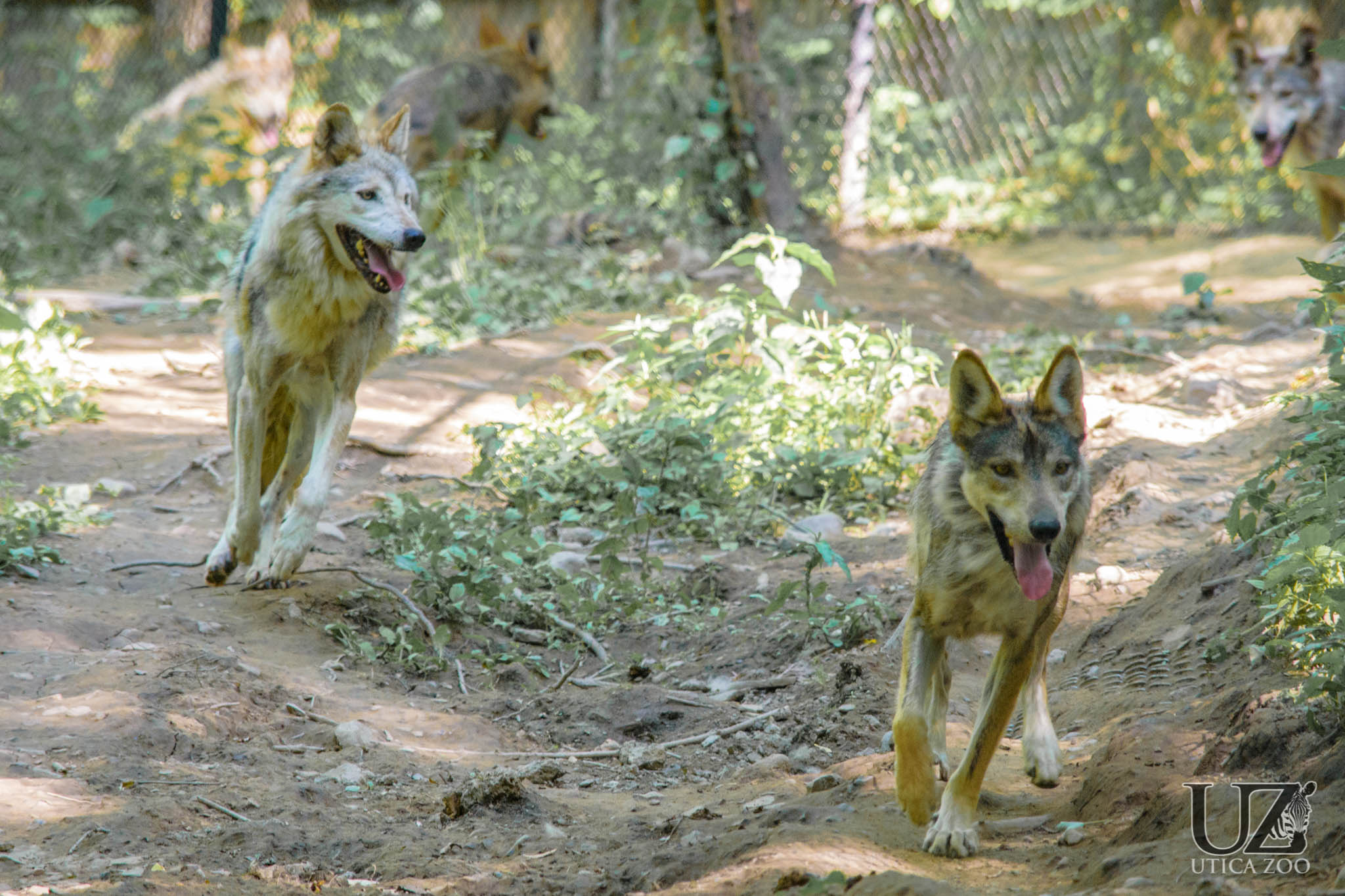 Utica Zoo is excited to officially announce the arrival of four new male Mexican Gray Wolves (Canis lupus baileyi) from California. The new wolves have joined our lone female wolf, Sierra, a long-time resident of the Zoo. Last year, we sadly announced the loss of Aztec, Sierra’s sister, to an aggressive form of cancer.

“Even though it sometimes happens in the wild, ideally we do not want our animals – especially a species like Mexican wolves – to live without companionship”, says Pearl Yusuf, Director of Animal Operations.” After Aztec passed, we were in touch with the right people to improve Sierra’s social quality of life.”

The new males – all 2-year-old siblings – came from the California Wolf Center outside of San Diego. The facility is dedicated to the care and conservation of Mexican Gray and Rocky Mountain Gray wolves. It has cared for and bred wolves as part of the U.S. Fish and Wildlife’s Mexican Wolf Recovery program.

All Mexican Gray Wolves are owned by the U.S. Fish and Wildlife Service, and managed by the
Association of Zoos and Aquariums Species Survival Plan. The two organizations oversee the care and housing of each Mexican Gray Wolf on an individual basis. Utica Zoo was in immediate contact with both organizations after the passing of Aztec to determine the best course of action for Sierra.

Fortunately, the Zoo was able to work closely with the USFWS and AZA to determine the best course of action was to bring in new companions for Sierra, rather than move her to a new facility.

A long dedication to Wolves
The arrival of the new male wolves is the latest addition to the long history of Mexican Gray Wolves at the Zoo. Since 2000, Utica Zoo has been an active participant in the conservation and advancement of the species. After the last of the original pack had passed away, the Zoo took a family group of 5 females. The offspring of one of the 5 females, our current female Sierra, has never bred; however, earlier this year, she was spayed and her reproductive organs were sent to AZA’s Reproductive Management Center in St. Louis, where they are cryopreserved. Part of AZAs Species Survival Plan is to collect and preserve reproductive material in order to assist in the production of endangered animals via artificial insemination. Further, the reproductive organs of her mother and sister, both Utica Zoo residents at one time, are preserved in the same facility.

From an original seven animals, the current population of Mexican Gray Wolves in captive care is 281, spanning 55 different institutions. There are 114 living in the wild as part of species recovery efforts. The arrival of the males represents the continued dedication and important role the Utica Zoo plays in the conservation of this critically endangered species.

Since their arrival, the new males have adapted nicely to their new home. They can be described as playful and curious; regularly seen towards the front of their habitat near the viewing platform. Sierra has also adjusted well to her new companions, due to the lack of competition because of the different pecking orders of males and females.

“We’re excited to be able to establish a new home for these four animals,” said Heath. “And we’re especially thrilled to give Sierra new pack mates to howl with again.”

National conservation efforts (from the U.S. Fish and Wildlife Service website): “The Mexican wolf is the rarest subspecies of gray wolf in North America. Once common throughout portions of the southwestern United States, the Mexican wolf was all but eliminated from the wild by the 1970s. In 1977, the U.S. Fish and Wildlife Service initiated efforts to conserve the species. In 1998, Mexican wolves were released to the wild for the first time in the Blue Range Wolf Recovery Area within the Mexican Wolf Experimental Population Area.”