Tenney stands with President Trump in commitment to the American worker 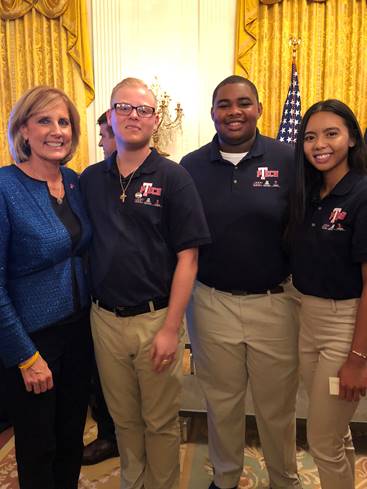 Tenney stands with President Trump in commitment to the American worker

Congresswoman Claudia Tenney (NY-22) attended President Trump’s remarks on the Administration’s Pledge to the American Worker in the East Room of the White House. Following the President’s remarks, Tenney joined as the President signed an executive order to enhance vocational training, creating a national council for U.S. workers and a workforce policy advisory board.

During the ceremony, companies from across the country signed the pledge to create 500,000 new career and development opportunities for students and workers.

“Too many Americans with the drive and passion to create and innovate haven’t had the opportunity to turn their dreams into realities,” Tenney said. “Under the past administration, the American workforce was left behind in the wake of bad trade deals, and soaring taxes that drove businesses and jobs overseas. No longer will the American worker be forgotten. Today’s executive order will increase access to workforce development programs, ensuring Americans have the skills they need to succeed in today’s job market. When given a level playing field and the tools to succeed, American workers produce the highest quality goods in the world.”

Tenney said as a fierce advocate for increased workforce development, she has cosponsored numerous pieces of legislation that enhance vocational and technical education.