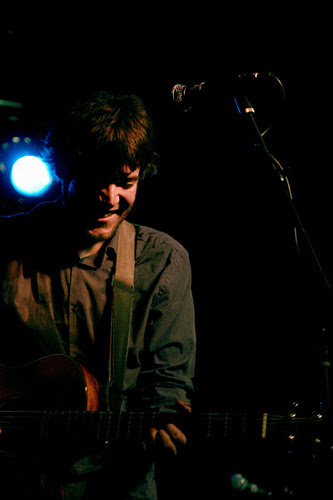 This is the first in our Odeon Singer-Songwriter Series. Each season The Nelson Odeon will present a pair of artists who we feel need to be heard.

This will be free to the public but donations at the door would be gladly accepted. Please join us on Saturday, October 6th and give a listen to John Elliott and Dusty Pas’cal.

John Elliott’s music has been called “tear at your heartstrings, folksy” and “a surreal and trippy cool kind of pop thing.” It has also been referred to as “Post-Seinfeld, Post 9/11 Eyebrow Rock.” Regarding Elliott’s lyrics, Chuck Schiele of The San Diego Troubadour says, “They get in, make their statement, kick you in the teeth, and get out before they start talking too much…And this lends to the urge of rolling any track to its beginning for another spin.”

Elliott’s catchy tunes, clear voice and chill-inducing melodies have been likened to a young Paul Simon, John Flansburgh and Ben Gibbard, as well as Gregory Page, Jason Mraz, Christopher Dale, Leonard Cohen and Bob Dylan. Schiele continues to speak about Elliott’s vocals as such: “…a lullaby of a voice that’s likeable and believable. There’s a stylistic melancholy tone and charisma in his voice…” Another independent review of one of Elliott’s albums reads, “The songwriting rivals any Radiohead/Coldplay hype the record labels could come up with. Who says folk music is dead…”

“One of the best kept secrets on the acoustic scene,” Elliott’s voice and lyrics – with a definite Americana bent – can also be heard on an episode of the CW’s “One Tree Hill”, NPR (All Songs Considered/Open Mic), Neil Young’s “Living With War” website, radio stations all over the world, in cars, in backyards, on iPods and at campfires. His songs have been called, “…intimate, honest, ripe with observant detail and a reliable playfulness.”

Dusty Pas’cal is from just down the road a piece, beautiful Skaneateles. He’s considered by many to be one of the top singer/songwriters in Central New York.

Dusty says that since he first picked up a guitar at age 13, hes been a firm believer in the purity of his music. “Early on, I was influenced by guys like Kris Kristofferson and Jim Croce, because that’s who my dad listened to,” he said. “But actually, I was most influenced by my dad, who’s a songwriter himself.”

Dusty will move you from one end of music’s emotional spectrum to the other – and it will be a ride you’ll want to take again and again.