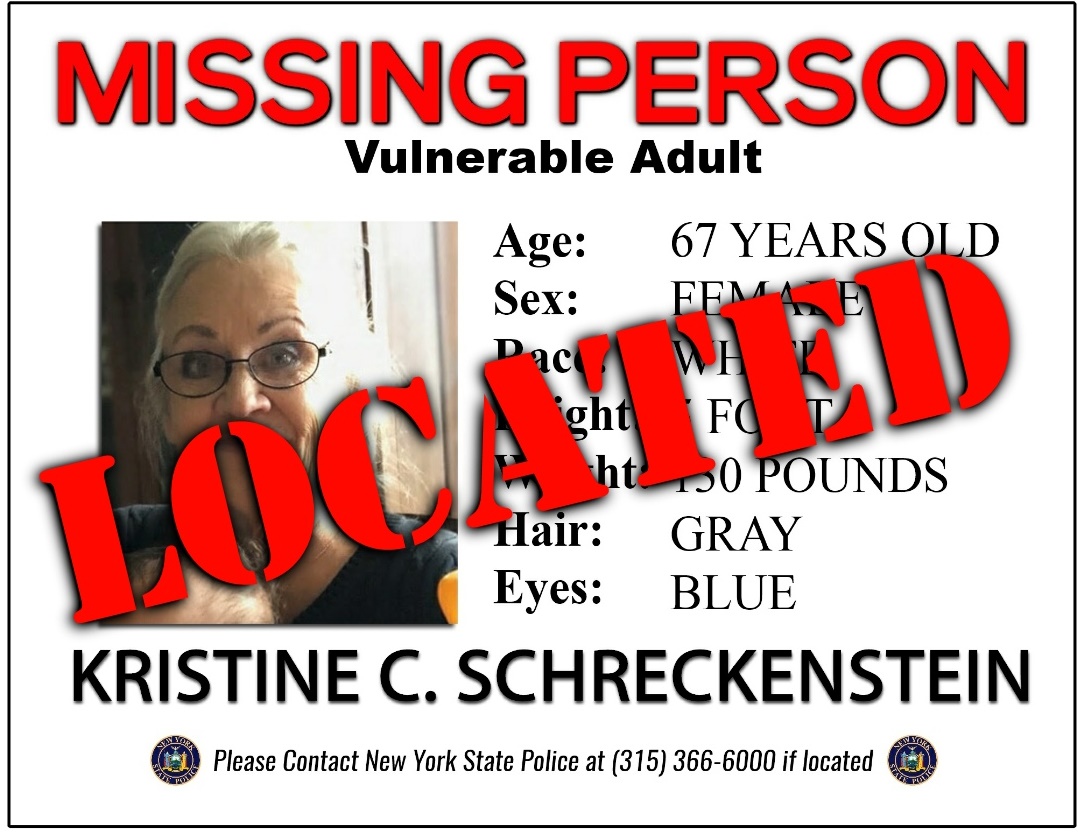 On May 4, 2019, Kristine C. Schreckenstein returned home safe and in good health.

Troopers in Oneida is searching for Kristine C. Schreckenstein, 67, who was reported missing by family members April 23, 2019, from a residence on Mosquito Point Road in Stockbridge. She is described as 5 feet tall, 130 pounds, with gray hair and blue eyes. She may be operating a red 2001 Audi TT with registration EBG-8474. If anyone knows the whereabouts of Schreckenstein, they are asked to contact the state police in Oneida at 315.366.6000.

Investigation revealed 39-year-old Sondra Tilbe and 19-year-old Mikenna Fox were involved in a physical altercation outside the residence. During the altercation, Tilbe suffered a stab wound to the left buttock and was transported to St. Elizabeth’s Hospital in Utica for treatment.

Fox, from Mapledale Road in Cassville, was charged with one count of second-degree assault, a class D felony. She was transported to the Oneida County Centralized Arraignment Court.

As Troopers arrived on scene, they located a front bumper with a license plate attached left at the scene along with two other vehicles that were parked and damaged.  The license plate found at the scene was registered to a 2003 Ford Mustang, which fled the scene.

At approximately 11:31 p.m., troopers located the suspect vehicle southbound on Interstate 81 in Cicero. As troopers activated their emergency lights, the operator, later identified as Christopher A. Courtney, 23, of 212 S. Collingwood Ave., Syracuse, refused to stop and accelerated south on Interstate 81. A traffic pursuit was initiated. Deputies from the Onondaga County Sheriff’s Office assisted in the pursuit and successfully deployed spike strips on Interstate 81 in Salina.

Courtney continued southbound into Syracuse. The pursuit ended when the vehicle became disabled at the intersection of North Salina and Bear streets.

Courtney was taken into custody without further incident and was charged with driving while intoxicated, third-degree unlawful fleeing a police officer, leaving the scene of a property damage accident and third-degree aggravated unlicensed operation, all misdemeanors.

State police were assisted by the Onondaga County Sheriff’s Office, including AIR 1.