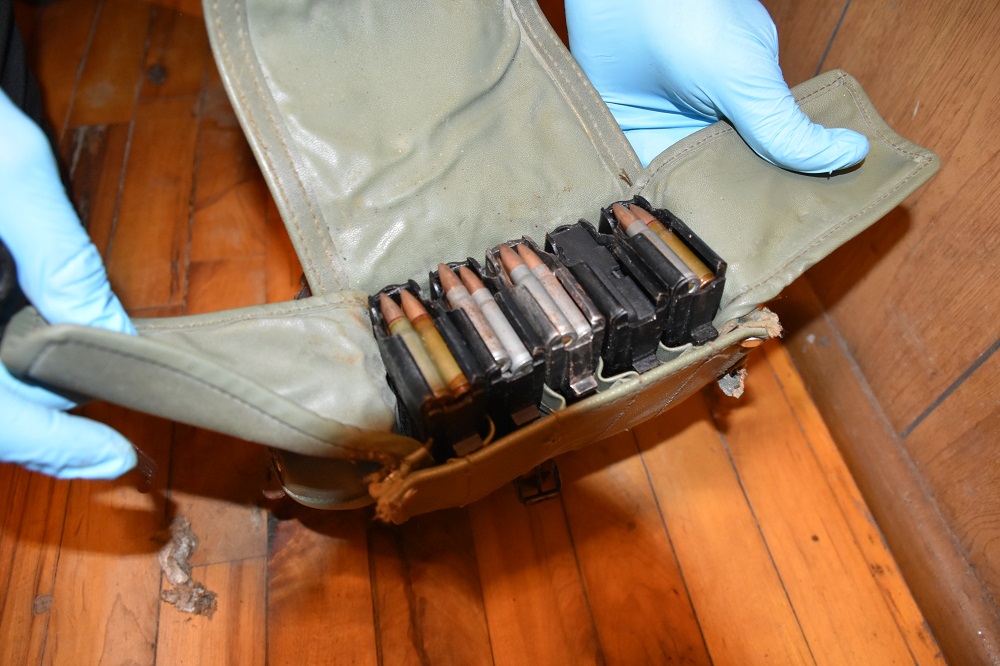 On Sept. 27, 2019, the New York State Police Special Investigations Unit in Syracuse, with the assistance of Troop D Uniform – SP North Syracuse, arrested Jeremiah J. Clark, 35, of Watertown, on one count of first-degree attempted disseminating indecent material to minors, a class D felony; and one count of second-degree promoting prison contraband, a class A misdemeanor.

Clark is charged with communicating, via text message, with what he believed was a 14-year-old female who was, in fact, an undercover state police investigator. For approximately three months, Clark sent text messages that included obscene conversations, pictures and videos that culminated in Clark traveling to Bridgeport to engage in sexual intercourse with the 14-year-old female.

A review of the text messages revealed that some were sent by Clark, a state correction officer, while he was on duty inside the Watertown Correction Facility in Jefferson County. Cell phone use inside the facility is prohibited.
Clark was issued appearance tickets returnable in Cicero Town Court (disseminating indecent material to minors) and Watertown Town Court (promoting prison contraband) and was released.

On Sept. 27, 2019, the state police Bureau of Criminal Investigation executed search warrants at 123 Grandy Drive, Liverpool; and 18 Park St., Apt. 1, Phoenix. As a result of these search warrants, electronic evidence was seized from both locations, and the following individuals were arrested:

Michelle E. Brown, 35, of 123 Grandy Drive, Liverpool, was charged with use of a child in a sexual performance, a class C felony and possessing a sexual performance by a child, a class E felony. She was transported to the Onondaga County Justice Center to await centralized arraignment.

Tye A. Hughes, 36, of 18 Park St., Apt. 1, Phoenix, was charged with three counts of promoting a sexual performance by a child, a class D felony; and one count of endangering the welfare of a child, a class A misdemeanor. He was arraigned in Volney Town Court and was remanded to the Oswego County Jail on $5,000 cash bail or $10,000 bond. Hughes is scheduled to appear in Schroeppel Town Court at 5:30 p.m. Oct. 6, 2019.

This investigation was initiated by the National Center for Missing and Exploited Children in conjunction with the state police Internet Crimes Against Children Task Force. State police were assisted by members of the Federal Bureau of Investigations Child Exploitation Task Force, Homeland Security Investigations and Oswego County Probation.

On Sept. 29, 2019, state police were contacted and advised the transaction was a case of a Lowe’s employee putting in the wrong phone number at the time of purchase, which misidentified the purchaser as the complainant in the investigation. The two individuals in the surveillance photo purchased the item with their credit card and there was no crime committed in this incident.

State police in Sylvan Beach are investigating an identity theft that occurred at the Lowe’s Home Improvement Store on Lowes Boulevard in Herkimer.

On Sept. 7, 2019, two unidentified males entered the store, purchased a Frigidaire gas range for $594, using a fraudulent credit card, and left in a red pickup truck.

State police in Watertown are investigating a larceny from Wal-Mart in the town of Watertown.

A male was captured on video surveillance selecting a CO2 air pistol and taking it out of the packaging before concealing the air pistol in his waistband.

If anyone can identify the individual in the store security photo above, they are asked to contact state police at 315.366.6000. All information will be kept confidential. Refer to case #9173169.

Srogi is charged with using his cell phone and laptop at an unsecured residential Wi-Fi access point to upload and download images and videos consistent with child pornography via the internet.

Srogi was transported to the Oneida County Jail for centralized arraignment.

This investigation was conducted by members of the Internet Crimes Against Children Task Force, which includes members of the state police, Homeland Security Investigations and the Oneida County Sheriff’s Office.

Investigation revealed Joseph W. Cromp, Sr., forcibly entered the residence while armed with a revolver and engaged in a physical altercation with his 22-year-old son and another adult male.

A search warrant was subsequently executed at the residence, and numerous firearms were recovered, including the pistol used in the crime. Cromp, a convicted felon, was subsequently charged with the following charges:

On Sept. 25, 2019 at approximately 1:30 p.m., state police observed a 2015 Peterbilt tractor trailer driving erratically through a work zone on I-90 in the town of Elbridge. Troopers stopped the tractor trailer after it struck several construction cones and nearly collided with a passenger vehicle.

The driver was identified as Stephen M. Goodwin, 36, of Columbus, N.J.; he was found to be impaired by drugs and in possession of heroin.

While interviewing Goodwin, it was determined that he used heroin while at a Thruway rest stop shortly before the incident. After he was evaluated by a drug recognition expert, Goodwin was transported to SUNY Upstate Medical University, where he submitted to a consensual blood draw.

Once medically cleared, he was transported to SP Syracuse where he was charged with seventh-degree criminal possession of a controlled substance, a class A misdemeanor; driving while ability impaired by drugs, an unclassified misdemeanor; unsafe lane change, failure to keep right, and speeding in a posted work zone.

Goodwin was turned over to a sober third party and released on appearance tickets returnable in Elbridge Town Court at 5 p.m. Oct. 7, 2019.

The investigation revealed that the driver of a 2012 Chevrolet, Julia K. Kaveney, 34, of Rome, struck a 2017 Ford Escape operated by Timothy D. McQuinn, 28, of Oneida. Both vehicles went off the road, but there were no injuries reported.

During the course of the investigation, troopers determined Kaveney was intoxicated. She was taken into custody, transported and processed at SP Syracuse where her blood alcohol content was determined to be .19 of 1 percent. She was subsequently charged with aggravated driving while intoxicated, an unclassified misdemeanor, and vehicle and traffic violations.

Kaveney was turned over to a sober third party and released on appearance tickets returnable in Sullivan Town Court at 4:30 p.m. Oct. 8, 2019.