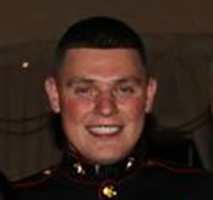 On March 13 Trooper Fredenburg collapsed while participating in a daily physical training run with members of the 203rd Basic School.

At 6:30 a.m. the Academy class was approximately a quarter-mile into their morning run around the UAlbany campus when Trooper Fredenburg fell to the ground.

New York State Police Academy staff tended to Fredenburg, attaching an AED, which advised a shock. His heart was restarted by the AED and he was transported to Albany Medical Center where he died at approximately 7:30 a.m.

Fredenburg, 23, served as a U.S. Marine from 2009 until 2013 and was in his second week of training at the New York State Police Academy.

Fredenburg is from Utica and is survived by his wife, Angela; father, Donald Sr.; mother, Joanne Cowley.

Any updates, including funeral arrangements, will be posted on the New York State Police Online Newsroom.

“State Trooper Donald Fredenburg had already proven his passion to serve for a cause greater than himself, first as a U.S. Marine and then in the early pursuit of a promising career with the New York State Police,” state Senator Joseph A. Griffo said.
“Sadly now, the community has lost someone who had shown so much potential to lead by example, and I offer my sympathy, condolences and prayers for Trooper Fredenburg’s family and friends.”

Oneida man arrested in connection with a string of stolen vehicles