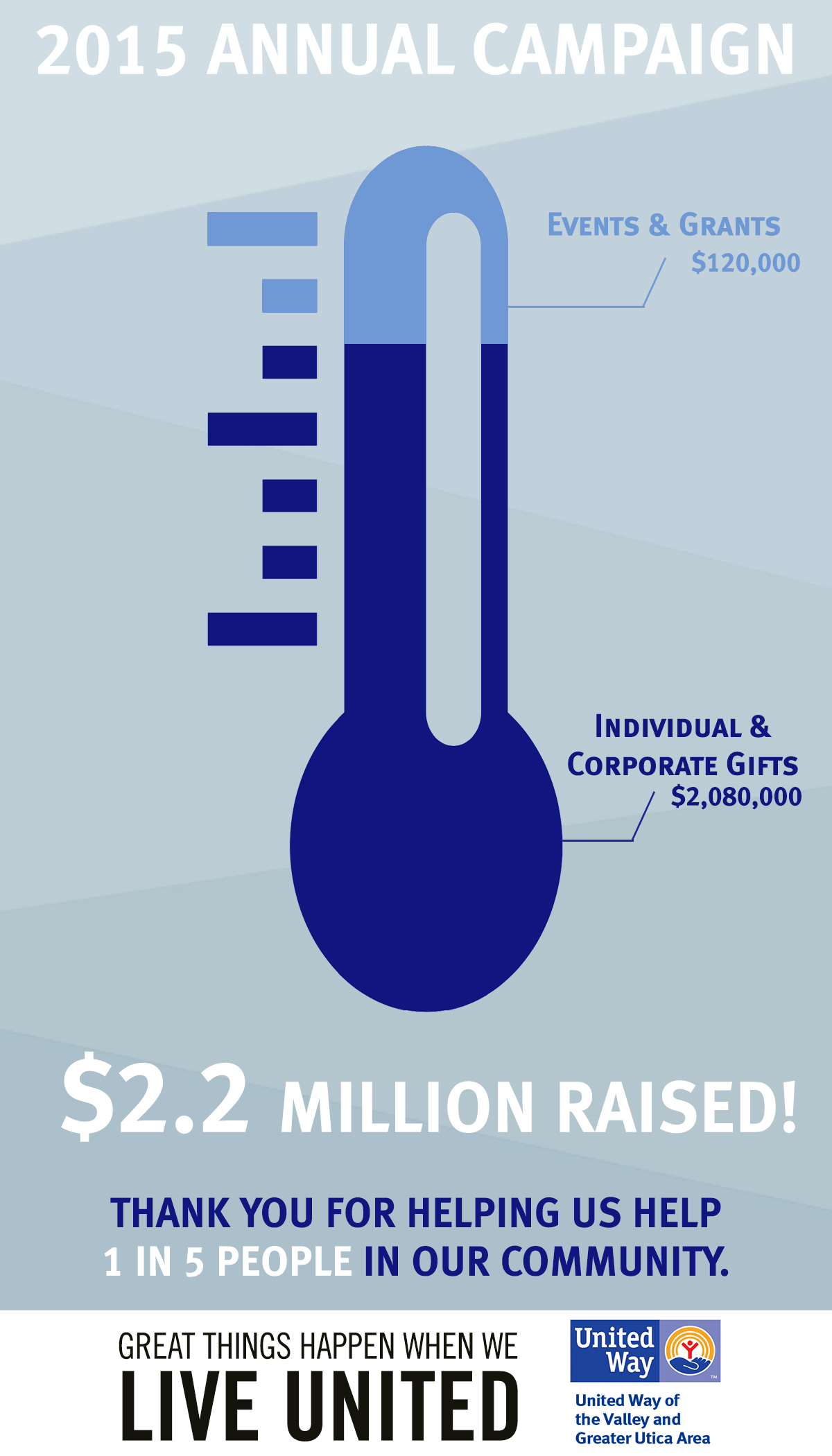 More than 100 people gathered at the Boilermaker Building in Utica May 5 to celebrate the 94th annual Campaign Finale for United Way of the Valley and Greater Utica Area. Guests met with funded partners, enjoyed hors d’oeuvres by Seymour’s Bar and Grill, beer donated by Saranac, and live music by The “Other” Guys of Soundbarrier, before awards were given and the Campaign results were announced.

One in five people in our community requests help from a United Way-funded partner every year. Whether they receive that help depends on you, it depends on me … it’s up to all of us to raise funds to make real, lasting, and positive impact in our community.

Dollars raised in the 2015 Campaign fund crucial programs in the Valley & Greater Utica Area that focus on education, health, income and community safety-net.

The 2015 Campaign theme was “Great things happen when we LIVE UNITED.” When we all come together, we advance the common good. In attendance and recognized for their hard work throughout the 2015 Campaign were Cabinet members; volunteers who are the backbone of the fundraising efforts of United Way.

This year’s Cabinet members are:

“We’re all here tonight to celebrate our fund-raising success. That success isn’t about the money we raised… it’s the difference we make,” said Brenda Episcopo, CEO. “We are committed to ensuring your donations are put to the most efficient and effective use, meeting our community’s greatest needs.

“We had a great campaign! Nearly 170 companies, numerous state employees and nearly 8,000 donors showed one way to LIVE UNITED. They gave; generously. Our great community challenge, sponsored by Carbone Auto Group, Chanatry’s, Clifford Fuel and Joe Tahan’s Furniture, asked people to step up their giving… and many did.”

With the dedication of volunteers, and participation of individual donors and corporations, $2.08 million was raised in the 2015 United Way Campaign. When events and grant funding is included the funds raised is $2.2 million.

In addition to monies raised directly from Campaign, United Way works to make a measurable difference in the community in the areas of health, education, income and community safety net.

A few of these highlights for 2015 include:

– Launching a searchable website at 211midyork.org: now, in addition to calling 211, residents in Madison, Oneida and Herkimer Counties can search online for help when they need it.

– Initial investments are being used to help launch:

o R4K to get more kids ready for kindergarten, which ensures they hit third-grade benchmarks, graduate from high school and start out on a strong path for success.

o Assist in bringing in more than $3 million to tackle homelessness.

o United Way is very excited to be named a partner with the City of Utica by Assemblyman Anthony Brindisi for the Governor’s Anti-Poverty Initiative, bringing another $1.5m into our community for this work.

“These accomplishments would not have been possible without the support of our 170+ companies, 1800-plus volunteers, and 49 funded programs,” Episcopo recognized.

Concluding the announcement of Campaign results, awards were given to companies, organizations and individuals that participated in 2015 fundraising efforts.

United Way encourages all community members in the Valley & Greater Utica Area to LIVE UNITED and advance the common good, through donating and volunteering. Those that wish to learn more should visit www.unitedwayvgu.org.